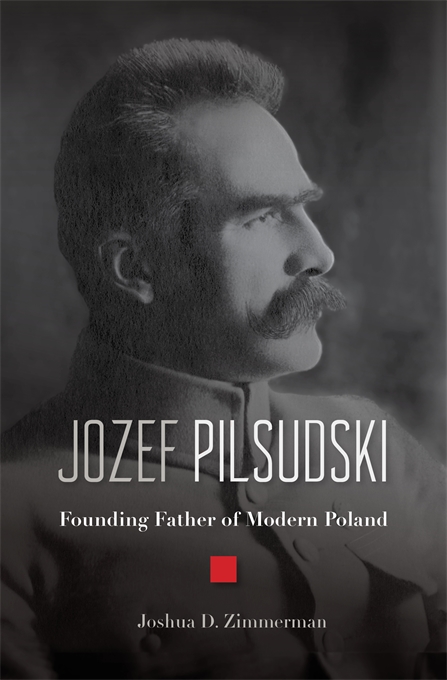 In our ABC interviews, we ask an author of a newly published book only three questions:

Tocqueville 21: Why did you choose to write this book?

Joshua D. Zimmerman: I first encountered the subject of Jozef Pilsudski while an undergraduate at the University of California at Santa Cruz.  I was then a 20-year-old history major when Neal Ascherson’s The Struggles for Poland came out in 1987. Leafing through its pages, I came across Jozef Pilsudski’s name for the first time. I learned that he was modern Poland’s first head of state and commander-in-chief and that, at age 50 in November 1918, he had already had a long career as leader of the clandestine Polish Socialist Party in Imperial Russia, a party that called for social democracy and the separation of Poland. One passage in particular made a strong impression, one to which I would repeatedly return in the coming decades: “Pilsudski in his revolutionary days had taken little account of which comrade was Jewish and which was not, and his sense of history led him to recognize the Jews as part of Poland’s heritage.” There were no scholarly biographies in English, although noted historians like Robert Blobaum and Simon Montefiore called for one. I learned Polish and began to write about Polish history. In my first two books, Poles, Jews and the Politics of Nationality: the Bund and the Polish Socialist Party in Late Tsarist Russia, 1892-1914 (2004), and The Polish Underground and the Jews, 1939-1945 (2015), Pilsudski features prominently but he was not a primary focus in my second book. Notably, I did not cover World War I or the interwar years other than a chapter in my second book on the years 1936-1939 following Pilsudski’s death. It was almost inevitable that I would close the chronological gap for my third book and write the first scholarly biography of Pilsudski in English.

JDZ: The goal of this biography is to restore Jozef Pilsudski in the collective memory of the English-speaking world. I argue that Pilsudski stood out among European statesman before 1939, for four reasons. One, Pilsudski was the only European statemen to champion the independence of Ukraine after World War I, both in word and in deed. in May 1920, in a joint Polish-Ukrainian campaign, Pilsudski launched a military campaign to free Ukraine, entering Kyiv on May 7 and proclaimed the creation of the Ukrainian National Republic, only to be forced to retreat one month later following a Red Army counter-offensive. Two, Pilsudski successfully repelled the Red Army on August 16, 1920, as it approached Warsaw after Polish and Ukrainian troops rapidly withdrew, in a wildly successful counter-offensive that routed the Russians 25 miles east within two days.  Pilsudski was credited with having saved Europe from a Bolshevik incursion. Three, in March 1933, one month after Hitler came to power, Pilsudski was the first European statesman to accurately assess the threat Nazi Germany posed to the rule-based international order. To put Hitler on notice, Pilsudski dispatched troops to reinforce the German-Polish frontier and spread rumors that he was planning a joint French-Polish preventative war to remove Hitler from power. Hitler responded in an uncharacteristically conciliatory manner. Taking Pilsudski’s threat seriously, Hitler conceded to Pilsudski’s demand and publicly renounced all territorial claims on Poland at a speech to the Reichstag in May 1933. It was only after Pilsudski died in 1935 that Hitler embarked on land grabs in the Rhineland, Austria, and Czechoslovakia. As I argue, Hitler knew that Pilsudski was the only statesman who would have acted decisively to prevent German land grabs. Four, Pilsudski defended Jewish and minority rights throughout his rule, going against the fascist and antisemitic trends of the times.

JDZ: The figure of Pilsudski is the story of the democratic ideal in modern Europe, and my biography is the first to tell his life story and its importance in the development of democratic institutions in reborn Poland. Whereas previous biographies focus on Pilsudski’s heroism in creating an independence Poland and settlement its frontiers, my study departs from these works by meticulously reconstructing Pilsudski’s role in  establishing the building blocks of a democratic state.  In the struggle for the open society, the democratic ideal faced (and faces) challenges from below as well as from above in the temptation of autocracy. And Pilsudski’s life helps illustrate both those challenges. Born in 1867 in the Polish-Lithuanian provinces of the Russian Empire, an oppressive state that until 1905 was Europe’s last absolutist monarchy, the young Jozef Pilsudski fought – and sacrificed his personal freedom – for a democracy in an independent, constitutional state. This breakaway republic – separated from Imperial (or Bolshevik) Russia and united with the Polish provinces of German and Austria-Hungary – was intended as a bulwark against the spread of authoritarian and illiberal government. Pilsudski’s democratic proclivities were on full display in the 1890s when he edited and distributed the Polish Socialist Party’s clandestine organ. In one of his editorials, appearing in June 1897 when he was 30 years old, he wrote that the separation of Poland from Russia “will bring about the most favorable parliamentary form of government based on universal suffrage, complete freedom of speech, the press and assembly … We will demand the struggle for an independent Polish Republic based on democratic principle.” The subject of Pilsudski in the period immediately following World War I is in large part the story of the central role he played in presiding over the establishment of democratic institutions.  In the years 1918-1921, Poland under Pilsudski introduced universal suffrage for men and women, free and fair elections, an independent judiciary, as well as freedom of speech, religion, and the press.

Given absolute power as head of state and commander-in-chief in November 1918, the 50-year-old Pilsudski worked diligently for a speedy democratic transition. Within the first three weeks of independence, Pilsudski named a provisional government and set a date for parliamentary elections for January 26, 1919. Unlike Mussolini and Hitler, who assumed leadership in an existing democratic system with the intent purpose of replacing democracy with a one-party dictatorship, Pilsudski himself was the creator of the democratic, parliamentary system of government in reborn Poland. His life traces the promise and perils of democracy in the state of Poland. The dilemma of evaluating Pilsudski lies in the fact that the same man who created the democratic system in 1918-1921, retook power in an extra-legal, un-constitutional military coup in May 1926 at a time when he believed democracy and the state were in peril, thus leaving a mixed legacy.

Previous interviews in our ABC series include: