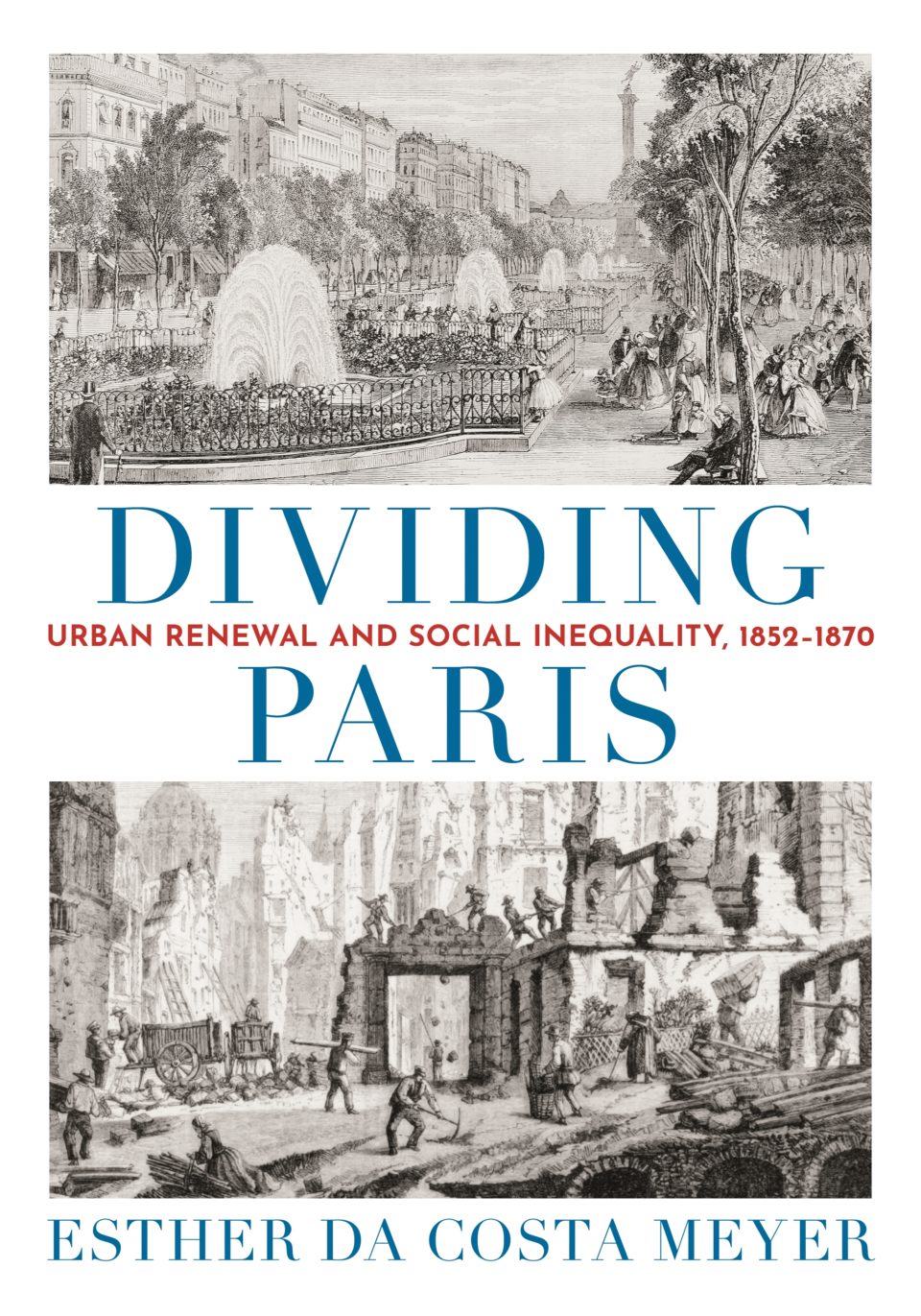 This is the second ABCs short interview at T21. Our first was earlier this month with Christina B. Carroll about her new book The Politics of Imperial Memory in France, 1850-1900. In these interviews, we ask each author only three questions:

Entitled “The ABCs,” we hope they provide a concise and appealing introduction to books that we believe merit attention.

Esther da Costa Meyer: As an architectural historian from the Global South, I have always been interested in how former colonies helped shape the culture of their respective metropoles, and in the reciprocity of cultural exchange, however unequal the conditions. In Second-Empire Paris, museums were filled with art, sometimes looted, from the colonies; street names recalled territorial conquests overseas; exotic plants and trees from distant dominions graced the city’s parks and gardens, while science and technical knowhow were deeply marked by the fruits of the regime’s geoimperial reach across the globe.

The role played by women—women of different classes—has been another major preoccupation of my published work. Nineteenth century archives are often silent about their contributions, though wealthy women were more likely to leave written traces. Recuperating their experience for architectural history and enabling them to represent themselves, is a major challenge. The same holds true for the working classes who built the gleaming new capital that the Second Empire was erecting within the folds of the old. They, too, have left fewer written documents than middle- and upper-class men. But the laboring poor have also been marginalized in the narratives of architectural history. The Second Empire’s reconfiguration of the city, a wealthy core, surrounded by a ring of villages and industrial enclaves, effectively ostracized the overwhelming majority of workers who could not afford rising rents in the center. The new social goods––broad boulevards, gas lighting, greenery––were not for them. Despite neglect and disinvestment, workers were hardly passive victims: vibrant countercultures were forged in the periphery where resilient men and women occasionally succeeded in overcoming the political and infrastructural violence marshalled against them.

EdCM: My book provides a reassessment of the urban renewal of Paris under Napoleon III and his iron-willed prefect, Georges-Eugène Haussmann. Admired for years as the man considered solely responsible for the vast changes that transformed the city, Haussmann has also been justly criticized for criminalizing the poor and brutally destroying large swaths of the historic fabric in the city center to make way for new construction. Yet Haussmann was at the service of the industrial and mercantile sectors of the economy who shared his views and prejudices; the agenda he carried out was in fact devised by others.

I also take issue with persistent attempts to see nineteenth-century Paris in exclusively Franco-centric terms. Most books on the city’s architecture continue to use an a-historic, Eurocentric lens: old myths such as “capital of the nineteenth-century” or “capital of modernity” die hard. Taking an approach indebted to Postcolonial and Subaltern Studies, which focus on a larger, transnational world, I reject the shopworn notion of modernity as a purely European phenomenon. Far from seeing it in a purely positive light—improved water supply and sewerage, systems of mass transit—we must expose its violent side. Adapted to the needs of the hegemonic forces who underwrote the renovation of Paris, modernity required devising the legal and economic frameworks that allowed them to destroy entire blocks of tenements and expropriate valuable land in the center.

Urban governance was an instrument of capitalism that continually served the interests of the elites. Facilitating circulation and consumption ranked high on their agenda. Fear of revolution and the many uprisings that had taken place since 1789 also dictated the measures ultimately taken by the municipality, and eventually led to a spatial division of labor that inscribed social classes legibly across urban space. In 1860, the belt of villages and industrial enclaves surrounding Paris was incorporated into the city. While the elegant areas in the west and in the center were lavishly funded and embellished, thanks to laws somewhat similar to eminent domain, the under-serviced outskirts became increasingly class-specific. Annexation thus divided the city into a high-end western part, carpeted by sumptuous parks and crisscrossed by elegant arteries, and a working-class east, both encircled by a drab, impoverished periphery. Urbanism was one of the many forms taken by what was a de facto class war that transformed the city’s social and political topography and contributed to social polarization.

EdCM: My book is deeply indebted to the incisive work of Henri Lefevre and like-minded scholars who reject essentialist conceptions of urban space as neutral and self-contained. Rather than taking urban networks as given, it is imperative to understand how they were socialized, that is, used, misused, interpreted, and transgressed by different groups. These thinkers also call into question the interested nature of representations which, in the case of architectural history, consists of plans, drawings, documents, and photographs of buildings that enable them to study the past. These are not value-free, however, nor do they give voice to all of Paris’s social groups and diverse cultural backgrounds. To capture those viewpoints, one must look at other sources, newspapers, memoirs, novels, and visual urban culture.

Urban geography is another scholarly discipline that inspires my work. Now that our capitals are reliant on a global division of labor, they are surrounded by new peripheries teeming with migrants, the fruit of an aggressive late capitalism in search of cheap labor. Decaying inner cities are quickly giving way to elegant areas of residence and leisure and have become major sources of profit. Along with rising income inequality, today’s influx of refugees and illegal immigrants have helped us see the lacunae in our views of nineteenth-century Paris, a city that was equally diverse, plagued by urban fractures, spatial segregation, and by a degree of immiseration that affected three quarters of the city’s residents. The legal and financial instruments devised to implement gentrification without social sustainability force the more vulnerable part of the urban population to areas devoid of proper housing or infrastructure. None of these problems follow unproblematically from the past, according to a simplistic determinism: they are also the fruit of new developments, from deregulation to service industries. Nevertheless, the past resonates, a powerful reminder of the fragility of democracy and the ever-evolving forms taken to undermine it.

Esther da Costa Meyer is Professor emerita of modern architecture in the Department of Art and Archaeology, Princeton University, and Visiting Professor at the Yale School of Architecture. Born in Brazil, she earned her Ph.D at Yale, and has published on architecture, design, gender, and urban history.