The Pre-History of Post-Democracy 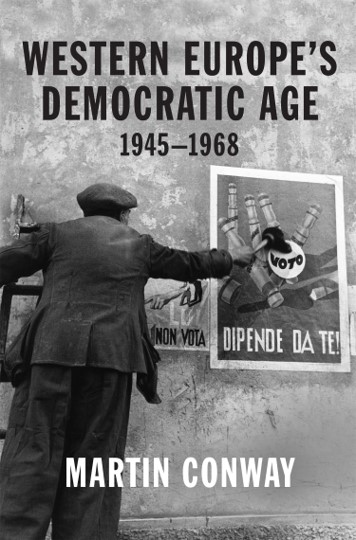 ** This is the third in a series of three reviews of Martin Conway’s new book Western Europe’s Democratic Age: 1945-1968. Conway’s response will be published tomorrow.

You can read the previous reviews here:

Come to think of it, there aren’t that many historians of democracy. Of course, there are plenty of people writing about democratic ideas in the history of political thought, and there are those ambitious enough to attempt blockbuster accounts of democracy from NATO to Plato (with varying degrees of success). But the historical study specifically of democratic institutions during discrete historical periods is surprisingly rare.

Martin Conway has been a pioneer of properly understanding the development of democracy in Western Europe. Long before others took note of the fact that the 1950s were not really an era of “restoration,” as German critics of Adenauer kept asserting, Conway emphasized the distinctive—and novel—character of the democracies that were created in the Western half of the continent after the Second World War (Britain, as so often, took a bit of a Sonderweg).  He has now given us a sweeping account of the era from 1945 to 1968.  Just as with his previous articles, I have learnt much from this synthesis (for which Raymond Aron serves a self-consciously sober guide). For the sake of debate, though, I shall highlight some differences between Conway’s perspective and my own.

Conway rightly argues that there was no masterplan for democracy after the Second World War.  Democracy, as he nicely puts it, was not its own author; its success has to be understood less in terms of the strength of normative ideals put forward at the time, but rather as the result of democracy being combined with the reconstruction of effective state capacity and a whole range of practices for containing conflict (corporatism, for instance) which had only a tenuous connection to political democracy as conventionally conceived. What’s more, democratization was, as he puts it, a matter of “cautious improvisation” and consciously unheroic—though often highly paternalistic—leadership by old men deeply marked by the cataclysms of the mid-twentieth century.  Still, there are common patterns, and the one I would emphasize even more than Conway does is the desire to constrain popular sovereignty.

In political philosophy, sovereignty was systematically devalued as a concept—the highly influential Jacques Maritain was one of its most vociferous critics. But it was also delimited in practice, because European elites felt a deep distrust of the demos. After all, in light of the numerous accounts of how “mass democracy” had enabled totalitarianism (Jacob Talmon’s was only one among many), there was a sense that the people themselves—irrational, easily seduced by demagogues, etc.—had brought recent political catastrophes on themselves. Democracy was crafted in the shadow of a pervasive cultural pessimism.

Concretely, the imperative of constraining peoples translated into things like a de facto ban on national referendums in some countries, and, less obviously, a comprehensive weakening of parliaments: France and Germany are prime examples; in fact, the National Assembly ended up as the least powerful parliament in the West. The ability of legislatures to delegate power was restricted—preventing them, so it was hoped, from the kind of democratic suicide the Weimar Republic and the French Third Republic had committed (or so common interpretations went at the time and, to some degree, still today). Never again should an assembly abdicate in favor of a Hitler or a Pétain. The danger of what the German lawyer Hugo Preuss—one of the fathers of the Weimar Constitution—had described as the danger of “parliamentary absolutism” had to be banished.

Further constraints were provided by constitutional courts—an invention of the Austrian jurist Hans Kelsen from the interwar period—and the supranational quasi-constitutional layer of rights protections provided by the Council of Europe and eventually the European Union. In some countries, “militant democracy” became a further means to limit the popular will: militant democracy—which was fully adopted by the German Constitutional Court in the 1950s—legitimated the banning of political parties and even restrictions of individual political rights for the sake of protecting democracy from enemies within. Those justifying this approach remembered all too well Goebbels’ gloating that “it will always remain one of the best jokes of democracy that it provided its mortal enemies itself with the means through which it was annihilated” (or his remark that “one could have arrested a few of us in 1925, and everything would have been finished and over”).

This distinctive, in many ways antitotalitarian, model of democracy was thus based on a thorough rejection of the past—as well as, needless to say, opposition to the “people’s democracies” being erected in the East. It was a new institutional configuration, but it was decidedly not accompanied by innovative political languages (Conway rightly highlights the fact that “democracy” played hardly a role in the rhetoric of the resistance and liberation). If anything, its public justifications were couched in traditional accounts of natural law and human dignity (and dignity, not freedom, turned out to be the master value of post-war constitutions).

European societies became more pluralistic in general (pluralism in the sense of decentralization of power was also promoted by thinkers suspicious of popular sovereignty); but the boundaries of political pluralism remained relatively narrow and were often rigorously policed. As said, this included formal party bans, but it also meant informal attacks primarily on the left; just remember how even by the 1960s Willy Brandt was still attacked as a traitor. Overall, political mobilization thus took relatively predictable forms; as Conway says, this was the era of intermediary powers: be it parties, whose legitimacy was now accepted in a way that had not been the case in the interwar period, or trade unions and employer organizations which bargained with each other in corporatist frameworks.

I am not sure how one would ultimately decide whether this new political model, with its innovative constitutional provisions, was ultimately less important than what Conway calls “the reshaping of the internal mechanisms of the state” (65). The latter may have made for effective governance, but the former provided a template for a stable politics for the continent as  whole—a model that was flexible enough to accommodate the contestations in and after 1968, and one that could be more or less successfully extended to Central and Eastern Europe after 1989.

I belabor this point partly because, towards the very end of his book, Conway also enters the debate about how to tell the story of democracy in Europe up to the present. And there he appears to express at least some sympathy for Colin Crouch’s post-democracy hypothesis (which has been highly influential on the continent, much less so in the UK and the US). To be fair, neither Crouch nor Conway claim that there was a golden age of popular sovereignty in the post-war period; they have a much more nuanced account of democratic gains and losses. Still, there is the notion that somehow, before an age of individualism and a primacy of rights over democracy, assertions of collective political will were somehow more common or easier. This might be plausible for the UK (even though even there the creation of the welfare state is a more complicated story), but it’s hard to think of the constrained democracies in Western Europe this way (and I haven’t even mentioned the constraints created by the Cold War). Conway himself stresses time and again how the people were “kept at a distance” in “safety-first” democracies; and it’s not obvious why the term coined by Bernard Manin for a much more recent period—“audience democracy”—would not also apply to an era characterized by what Conway plausibly calls an “anti-popular ethos.”

If one looks back from the post-1989 period, as Conway has also done in a suggestive essay on “regressive history,” the continuities dominate, as opposed to a periodization according to which a “democratic age,” with substantive collective choices of different kinds of society, was followed by an “era of rights” held by atomized individuals (a periodization that also easily becomes normatively loaded: just think of Marcel Gauchet’s lamentations). Rights were already crucial for the various constraints created for democracy in the post-1945 period, while the later period was characterized by a more profound and sustained mobilization of different groups who had been marginalized by the post-war democratic settlement. One might speak of  a simultaneous deepening and widening of political pluralism,  as well as novel forms of practicing democracy as a way of life, which, as Till van Rahden has pointed in a number of important contributions on the history of postwar-democracy, always needs to be thought alongside a more conventional perspective on political institutions.

What has changed, I would argue, is not so much the basic template of European democracy: it was in a certain way anti-populist then and remains anti-populist now. Rather, it is the role of intermediary powers: parties, professional news organizations, and trade unions in particular. Again, one should resist the temptation to idealize the post-war period, but the strength of the inner life of these organizations was remarkable. Conway at one point (71) claims that there wasn’t much “intra-party democracy” during the period, but I’m not sure that’s right. Figures like Adenauer and de Gaulle no doubt were dominant, and domineering, in many ways. But, unlike with parties today, which have sometimes deteriorated into personality cults (Trump’s Republicans are an extreme example; or think of Boris Johnson’s purges of the Tory party), there was plenty of space for internal legitimate opposition and critical loyalty. The German Basic Law —another important constitutional innovation—actually made intra-party democracy obligatory; the entirely plausible thought was (and is) that a party that is an autocracy on the inside might also turn out to have autocratic tendencies when in government. And while the weakening of intermediary powers is not solely responsible for what is often described as “the rise of populism” in our age, it arguably has been a contributing factor.  Populist leaders present themselves as the uniquely authentic representatives of the people, with a supposedly direct connection between themselves and the people. What Nadia Urbinati has called “direct representation” has nothing to do with broadening popular participation; it is simply about removing anything or anyone standing between the leader and the people. While it might be tempting to think that de Gaulle or Adenauer already practiced a similar form of politics, Conway’s book makes us see the differences—and thereby should also deepen our concerns about the inherently anti-pluralist populist politics of today.

Jan-Werner Müller is Roger Williams Straus Professor of Social Sciences and Professor of Politics at Princeton University. He works mainly in democratic theory and the history of modern political thought, and his recent publications include Contesting Democracy: Political Ideas in Twentieth-Century Europe (Yale: Yale University Press, 2011), What is Populism? (Philadelphia: University of Pennsylvania Press, 2016), and Democracy Rules (New York: Farrar, Straus and Giroux, 2021).