The History and Myth of American Democracy 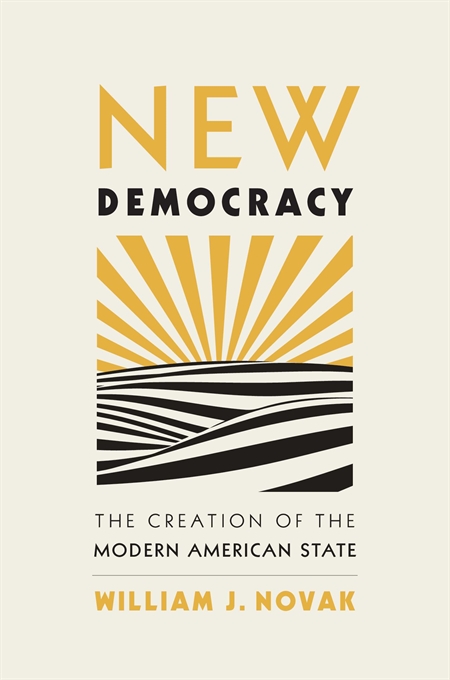 ** This is the third in a series of four reviews of William Novak’s recently published book New Democracy: The Creation of the Modern American State.

Creation stories and myths conjure up images of a distant past that penetrate our present in persistent, surprising, and often distorting ways. And so it is for the emergence of the modern American state. The creation story: the US was founded not to govern but to preserve freedom from government. The myth: an American state only emerged from some vague obsession with conquering “bigness” in the calamitous wake of the Great Depression in the New Deal. The consequences of these accounts have been as misguided as they have been enduring, perhaps best captured in Philip Hamburger’s zealous gloss, “Is Administrative Law Unlawful?”

Puncturing such narratives is no small task. It takes volumes, mountains of evidence, and multiple voices from many directions. Fortunately, we have an increasingly broad range of historians working from a wide set of perspectives to tackle these myths. William Novak has been at the forefront of this undertaking. His The People’s Welfare on the regulatory powers and technologies that pervaded antebellum US and his masterful article, “The Myth of the Weak American State” have provided some of the most convincing arguments for a more accurate account of the development of an American state. So it would be an understatement to suggest that historians have not been waiting for Novak’s New Democracy. With the book now in hand, its expansive chapters spreading from the birth of a new American citizenship to the rise of a democratic administration have rendered claims for a stateless, laissez-faire American past frankly untenable. The jury is being called back in.

History matters – so Novak concludes the opening salvo of his book. History in this account pushes far beyond narrative reflections on the past. If Novak draws so heavily on pragmatism, and specifically critical legal realism, it is also because he shares Dewey’s conviction that the state must always be rediscovered. The American state does not just have a history; it is a history. Far from a mere series of ever-expanding offices, decrees, and interdictions – though they too are present throughout the book – the US state must be understood in this account as a set of processes driven by popular action and public demands. As he says of the 13th, 14th, and 15th amendments in the opening chapter on citizenship, these were not just a change in the constitution. The amendments marked a new kind of law-making and constitutionalism, a veritable revolution in American public law. It was a more “democratic” law, which rejected the “judge-made” laws and principles of an ancient common-law tradition. It opened the possibility of a “revolt against formalism” in constitutional law that Novak places at the core of the creation of a modern American state. This new constitution was not grounded in juridical logic, but in legal experience. In the place of a static, founding document; the constitution was being made. Shedding the formal prescriptions of the old slaveholders’ constitutionalism, these amendments gave birth to nothing short of a new “governmental regime” which could now be shaped in response to social needs and demands from across the US. As Wilson himself argued: “‘The probable origin of government is a question of fact, to be settled, not by conjecture, but by history’” (75). Novak has taken us from the People’s Welfare to the People’s Constitution.

Democracy matters — indeed, it was by laying the foundation for a new democracy that these constitutional amendments inaugurated a new age of American government. Alongside the rejection of formal constitutionalism, a new democracy was born by transforming the scale at which American government, from municipal to federal, could operate. Shifting away from the myriad belongings, jurisdictions, and corporate privileges that still marked citizenship in the antebellum period, the second American Revolution of the Civil War witnessed the birth of a new culture of generality. Building on the ideas of the Paris School—Pierre Rosanvallon and Claude Lefort in particular—Novak picks up where The People’s Welfare left off. In that book we saw Novak trace the primarily local, variegated, and uncoordinated set of popular actions known as regulatory police through which popular authorities maintained a well-regulated society in the first half of the nineteenth century. But as Rosanvallon has argued, cultures of generality were essential to the birth and development of modern democracy. Novak uncovers this new mode of generality in American governance by tracing how the scale of popular intervention and governance expanded in the six decades preceding the New Deal. The nature of American democracy underwent a profound shift as regulatory police powers were scaled up. It was only with the enlarged ability to regulate for all citizens that government could take on the robber barons, monopolies, and political administrative corruption. Similarly, the very idea of public service and public utility in the American context depended on the capacity to operate for the American people in general and as a whole.

As Novak highlights in each of the chapters, it was impossible to separate this tectonic shift in government from the new democratic imperatives of welfare, combatting socio-economic and racial inequality, and public provision. To be clear, none of these novel ideals were fully achieved, and some of them were only touched upon. But American governance and US democracy, Novak clearly demonstrates, did come under the sway of a pervasive new set of principles. Perhaps most important among them was a new more sociological conception of the state “rooted in a complex set of social, political and institutional relationships.” Drawing on the ideas of Léon Duguit, remnants of the opposition between sovereign will and individualism, which were particularly ill-suited for a new American federalism, were being lopped off in favor of novel ideas on public utility and solving social problems. The invention of the social opened the path toward a massive political transformation. As Roscoe Pound noted in his famous critique of contract law, true liberty could not include the right to contract oneself into slavery and statehood could not be characterized by acts of a heteronymous public power lording over an “unruly” people. Rather, as his colleague Ernst Freund put it, “‘the care of the public welfare, or internal public policy, has for its object, the improvement of social and economic conditions affecting the community at large and collectively.’” In short, this was a move from “shadow democracy” to “real democracy.”

To present, histories of political modernity have overwhelmingly focused on “capital, industrialization, and social class.” Following a Tocquevillian inspiration, Novak has pushed us with this book to start with democracy. The full set of consequences inherent in this move remain to be explored. In many ways, New Democracy is but a first step in this exploration, opening irreparable cracks in the normal science of American political development. Two themes are particularly salient in this account. First, the push beyond the liberal and classical republican narrative of American history. As Novak convincingly argues, liberal theory of the state suffers from an obsession with individual rights, contract, property, market, and civil society, that simply do not accurately account for the rise of a democratic administration that transformed public life in the US (7). Similarly, “moments of the American political have always owed more to majorities and magistrates than to either Milton or Machiavelli” (8). Democracy in this account, offers its own set of obligations and priorities rooted in collective action and governmental supervision of the public good.

Second, histories of political modernity in the American context have overwhelmingly highlighted the European origins of American state building. Historians inspired by the work of Daniel Rogers’s Atlantic Crossings might easily draw the conclusion that if the US came to enjoy a robust public power in the service of the people, it was by adopting European ideas on the state. No doubt, European influence played a role, and Novak does not ignore these influences. But with The New Democracy and The People’s Welfare, we now have an account from the early American republic up to the New Deal in which Novak has upset the corollary idea that the core of US public authority is essentially foreign, a result of such “European” interventions. US government—its regulatory power, ability to provide for the public good, capacity to take on corruption and monopoly and shake drives toward public capture—was neither exogenous nor the result of crisis; the American state arose from within the long tradition of American democracy.

Stephen W. Sawyer is Ballantine-Leavitt Professor of history at the American University of Paris and director and founder of Tocqueville 21.