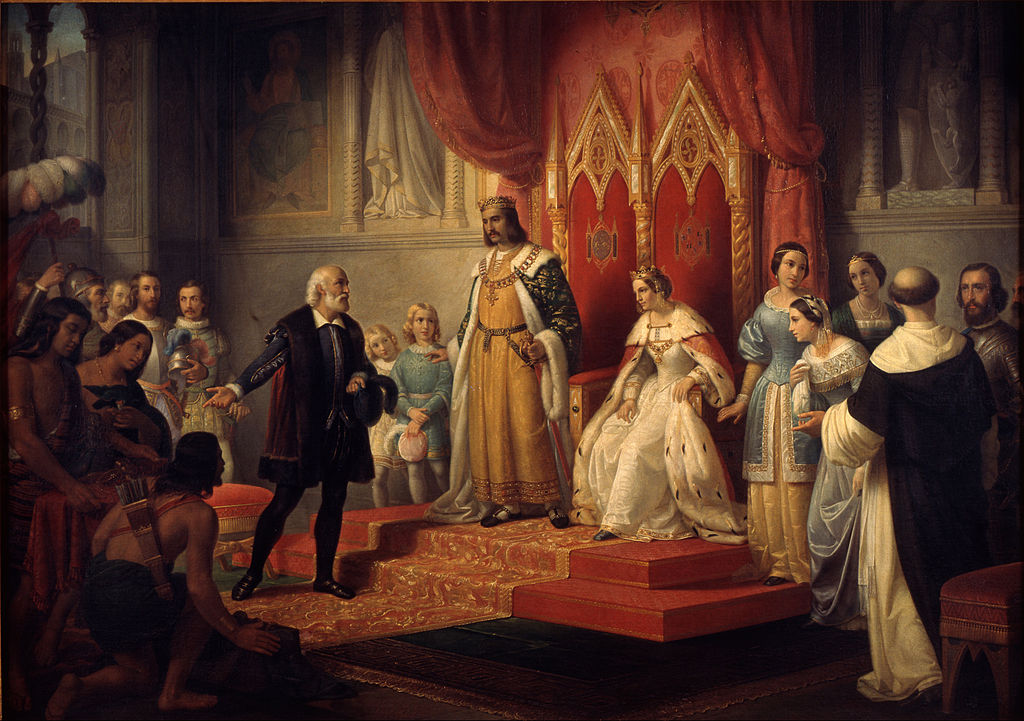 The court of Ferdinand and Isabella, the Catholic monarchs who completed the Reconquista. The name of Éric Zemmour’s party, ‘Reconquête’, is a thinly-veiled reference. – Painting by Juan Cordero (1850)

French presidential candidate Éric Zemmour has neither hidden nor made much of his being Jewish. When questioned—and almost exclusively when questioned; he seldom volunteers the information—he describes his Berber Jewish family as ‘traditional.’ He attended Jewish schools as a child, but readily admits to not being an actively practicing Jew.

When he discusses Jewishness at all it is always in the context of Stanislas de Clermont-Tonnerre’s famous apothegm during the debate on Jewish emancipation in 1789: “The Jews must be refused everything as a nation and granted everything as individuals.”

Zemmour’s application of this refusal of any special status for the Jewish community has led him to oppose laws protecting the memory of the Holocaust (calling such laws “Communist”); to condemn Jacques Chirac’s apology for the Vichy government’s role in the roundup of Jews; and, most notoriously, has led to his assertion that the Vichy government defended the Jews.

His eccentric positions on Jewish matters include his proclaimed understanding of the suspicions aroused by Alfred Dreyfus, whom he described as “German”; his defense of the “nobility” of those who attacked Dreyfus; and his claim that the Jews killed in a terrorist attack in Toulouse in 2012 were “above all foreigners” since their family chose to have them buried in Israel.

But if Zemmour has little patience with any notions of Jewish specificity, either ideologically or historically, this is far from the case when it comes to Catholicism. He has regularly spoken of the centrality of Catholicism in the spread of French universalism, indeed that Catholicism is the basis of French universalism, without defining the latter. Is he referring to the values of the Rights of Man? Of liberté, égalité, and fraternité?

He has perhaps never so clearly explained his admiration for Catholicism and Christianity as he did in two video messages released at the end of 2021. Zemmour’s Christmas Eve message was significant not only for what it said, but for what it didn’t. Few French would not know that Zemmour is a Jew. Even so, it would seem to be a likely thing to mention directly in this context. Instead, Zemmour does no more than allude to his religion, explaining the Berber origins of his name, but also in saying that “one can not be a Christian and celebrate Christmas.”

Christmas in Zemmour’s telling is not—or not just—the birth of Jesus, requiring love and recognition of him as Messiah. It is, instead, a weapon in Zemmour’s culture war. “All you need is to love the West in general and France in particular. Christmas Eve celebrates the birth of a civilization: ours.” Not for Zemmour any notion of a Judeo-Christian basis for the West: Judaism is excluded, its foundational nature elided from history. The clash of civilizations so dear to Zemmour is imbedded in his vision of Christianity.

It is a Christianity to which he grants qualities not everyone would accept as those that truly define it. In Christianity everyone is equal, he claims: “There is no race, no class; equality is holy.” He admits in passing that the Church has not been infallible, since it is the work of humans, but to speak of there being no classes or races, or to say that equality defines Christianity or Catholicism, requires blindness to centuries of human history. But it is of course not just the Church that Zemmour is idealizing: it is the West, of which it is both the source and emanation.

Christmas, in Zemmour’s telling, is instead a weapon in his culture war

Christianity is a bulwark against relativism, Zemmour argues, since the “truth” is “concrete.” It is also in its essence opposed to any form of ‘utopianism.’ It is thus equally a bulwark against the left. But the Church is also magnificent in and of itself: the video is made up largely of Zemmour touring French cathedrals, the embodiments of the Church’s grandeur: “The long adventure of French Catholicism is of unequalled splendor.” All that is good in France is owed to Catholicism: “There would never have been a Cross of Lorraine had there been no cross.”

France, “the Church’s eldest daughter,” is the source from which the entire Catholic world draws its strength and beauty: “The most evolved, creative, and sophisticated ; the most tolerant. France owes much to Catholicism, and the world owes much to French Catholicism.”

Zemmour, who shows so little concern for the history of Jewish suffering, even shrugging off the killing of “certain Jews” during France’s conquest of Algeria, insists that “Hundreds of millions of Christians are persecuted around the world … Never in its history has this religion been so martyrized in such a frightful silence.” Here we have Zemmour in his crudest form. Catholicism and Christianity are, to be sure, oppressed or attacked in certain corners of the world, but such a modest claim would be of little use to Zemmour. Ignored is the strength of Christianity in all forms around the world, the stranglehold of the religious right in America, the political strength that the religious right has demonstrated in France, its dominance in South America. Today’s Christians—many if not most of whom choose not to attend church, especially in France—are flattered by Zemmour and elevated to the status of the early Christians.

Zemmour never grants Judaism a positive role in, for example, maintaining Jewish cohesion and continuity over the centuries. This role is, however, assigned Christianity, with Armenia his chosen example in a video released after a visit there in late 2021. “The Armenians continue to defend their origins, their roots, their faith … This is a marvelous lesson the Armenians teach the French, who have a tendency to forget our roots.” Roots that are, of course, Catholic.

The choice of Armenia as a site for a visit for a French presidential candidate might seem odd. Yes, there is an Armenian community in France, one that has made important contributions, from Charles Aznavour to the Resistance hero Missak Manouchian. But even so, as a way of attracting voters this seems rather a strange choice. For who was responsible—or rather, the members of which religion were responsible for the Armenian genocide? Muslims. For Zemmour, then, what better represents the threat posed by accepting life among Muslims than the fate of Armenia’s Christians?

And if Zemmour can complain that no laws should protect the memory of the Holocaust, and that France never should have apologized for its role in the murder of its Jews, might it not be because the Holocaust was an intra-Occidental event? Far more fitting for his purposes is a genocide carried out by non-Westerners than one carried out by the ultimate representatives of human progress: the West.

Zemmour never grants Judaism a positive role in, for example, maintaining Jewish cohesion and continuity over the centuries.

The instrumentalization of Catholicism in service to his campaign is summed up when he says that “the Christian world must never refuse to make war when it’s attacked.” Offering himself as a modern crusading Saint Louis is Éric Zemmour. And so it is no accident that the name of his party is Reconquête. Reconquest. The proximate explanation of this party name reflects Zemmour’s conviction that France has been conquered and occupied by an internal enemy: Muslim immigrants. Zemmour’s movement is an attempt to reconquer the occupied country that is France today.

This militarized vision of political struggle is already frightening enough, but that is only one element of it. Reconquête also clearly and obviously points to the most important historical use of the term, the Reconquista, the seven-century long struggle on the Iberian peninsula carried out by Iberian Christendom to expel its Muslim rulers. Here again we see Zemmour employing Catholicism as a vehicle for his ideology, for it was not enough for los reyes Catolicos to defeat the Muslims, it was necessary to drive them out along with any sign of their presence.

Part of that presence, an essential one in fact, was the Convivencia, the peaceful cohabitation within Spain of Muslims, Jews, and Catholics. Though there’s no doubt that its utopian qualities are sometimes overrated, it was nevertheless for the most part a world in which the three faiths lived peacefully and fruitfully together. The Reconquista put an end to this, for not only did it end Muslim rule, it ended the Muslim presence and then, in 1492, the Jewish presence.

The Convivencia is the antithesis of all that Zemmour stands for, considering, as he does, that Islam is in its essence a terrorist and ineluctably foreign religion. And so a historical movement that put an end to any possibility of peaceful cohabitation can only find grace in Zemmour’s eyes. That it caused suffering to Muslims and to his own people is of no consequence. The West, after all, is Christian.