Some reflections on a natalist installation

Wandering through Paris a couple of weeks ago, I came across a small park just off the Boulevard Kellermann, dominated by a strange piece of public art: the “Monument aux Mères Françaises” (pictured).

The monument consists of a large central edifice, adorned with statues of women, frozen in the act of doting on stone children of various ages. To each side of the main sculpture stand statues of grateful men and women, looking respectfully at the mothers.

When they see mothers, they feel … Respect.

Erected in the mid-late 1930s, the Monument aux Mères Françaises was a product of the intensely natalist political culture of late Third Republic France. It stands today as a striking physical representation of both the gender politics and the biopolitical fears of the era. The inscription on the monument from the then-President of the Republic Albert Lebrun makes clear the social vision it represented:

“I believe that the devotion and abnegation of French mothers who sacrifice themselves for their children, and particularly those of modest means who deprive themselves and work so that their sons can grow up to the great destiny of serving the collective, should no longer be left out of national gratitude.”

For the interwar French republican state, women’s highest duty was to be mothers, and motherhood was about producing *male* children who could serve it militarily.

Natalism in Third Republic had always been inextricable from concerns about national security. In the late nineteenth century, France’s comparatively low birth-rate was frequently invoked to explain France’s defeat by Prussia in the War of 1870, and when an organised natalist lobby emerged in the 1890s, its main argument was that birth-rates were putting France at a military disadvantage. Moreover, it was in the aftermath of the Great War – in which France lost a greater proportion of its male population than any other belligerent country bar Serbia – that natalist policies began to gain widespread assent. In the parliamentary debate on the Versailles Treaty, Georges Clemenceau declared:

“The treaty does not say that France must undertake to have children, but it is the first clause which should have been included in it. For if France turns her back on large families, one can put all the clauses one wants in a treaty, one can take all the guns of Germany, one can do whatever one likes, France will be lost because there will be no more Frenchmen.”

Following the war, the natalist lobby began to secure its policy objectives: a Conseil Supérieur de Natalité was created to advise the government on the birth-rate, medals were awarded to mothers who had many children, and 1920 saw the passage (by an overwhelming majority) of a law that strictly criminalised abortion, contraception, and the distribution of “Malthusian propaganda”. The end of the decade also saw the institution of a social insurance system, which covered childbirth expenses, to which “family allowances” (child benefits) were soon added. Notably however, these “pro-family” policies did not go hand-in-hand with any improvement in the political status of women: in contrast to the success of feminists across the channel, efforts to obtain female suffrage in France were repeatedly defeated throughout the interwar period.

It was at the very end of the 1930s however, that natalist paranoia and policymaking both reached their peak. Over the course of 1938-1939, the right-wing government of Edouard Daladier established a universal system of family allowances paid directly by the state, created a “High Committee on Population” containing leading natalist experts and propagandists, and promulgated a decree-law on “the family and the French birth-rate” that became known as the “Family Code”. This Family Code included the mandatory teaching of demography in schools; measures to further repress abortion and pornography; financial incentives for marriage; additional child benefit; and punitive taxation on bachelors and childless couples. Significantly, the Family Code was supported by all major parties, including those on the Left. Even the Communist Party, which had in the early 1930s been advocating for the liberalisation of laws on abortion and contraception, had by the mid-1930s dropped such positions, instead adopting a natalist programme and propagandising for “the recognition of motherhood as a social function”.

At the same time, the main natalist lobbying organisation, the “National Alliance for the Growth of French Population” (ANAPF) stepped up its lobbying efforts. Over the course of the late 1930s, it distributed tens of thousands of copies of various lurid anti-abortion pamphlets amongst medical professionals, social workers, and the police, along with tracts warning about the military threat posed to France by the low birth-rate. The ANAPF was no marginal force: in 1939 it claimed 25,000 members – including many senior politicians and religious leaders – and its long-time president, Ferdinand Boverat, sat on the new High Committee on Population.

It was in this context then that the Monument aux Mères Françaises was officially inaugurated in October 1938, at a grand public ceremony attended by 5000 military veterans, 300 members of the Legion of Honour, and 200 boy-scouts, and presided over by the President of the Republic and his wife. Also in attendance were the minister of public health, the president of the Paris municipality, the Chief Rabbi, the head of Protestant Federation of France, a representative of the Cardinal-Archbishop of Paris, and various military figures including, notably, Marshal Pétain. 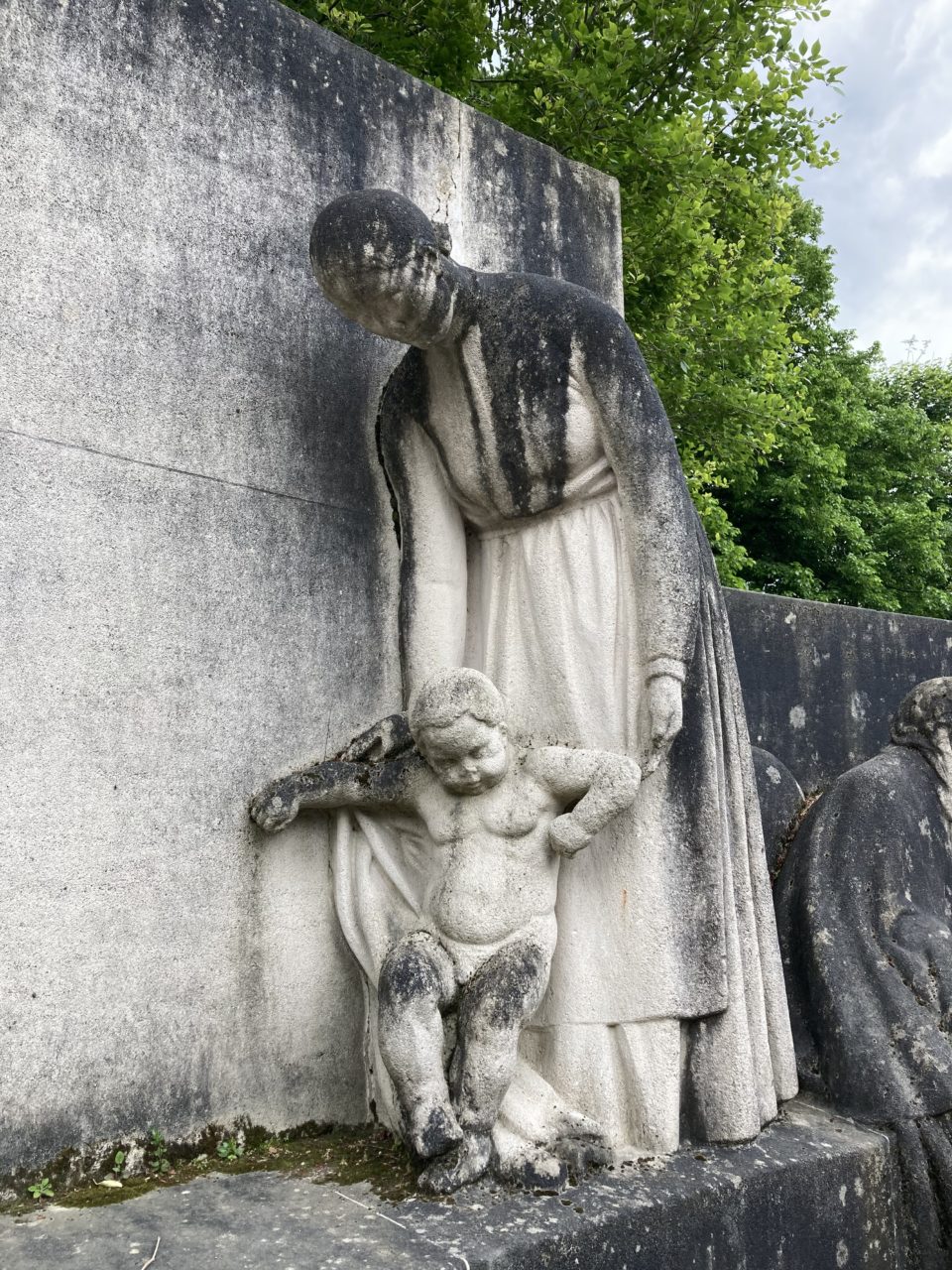 Marshal Pétain’s presence at the unveiling of a natalist monument should be no surprise – when he came to power following the Third Republic’s military defeat by Germany in 1940, he declared the main causes of its defeat to have been “too few children, too few arms, too few allies”. His collaborationist Vichy administration intensified natalist efforts in a more draconian direction: women’s access to the professions was restricted, financial incentives were provided to housewives, and abortion was elevated to the status of a “crime against the race”. More prosaically, “mother’s day” – long a natalist hobbyhorse – became an important state celebration. Under Vichy, the Monument aux Mères was used for the regime’s propaganda efforts, serving, amongst other things, as a location for official mothers’ day celebrations, and as a parade ground for the Milice.

Although the end of the Second World War saw Vichy officially repudiated (and French women finally granted the vote) the new republican state that emerged was as aggressively natalist as its predecessors: a new “National Institute of Demographic Studies” was created to continue the work of pre-war population bodies, run by many of the “experts” behind the family policies of 1938-1939. Generous family allowances were therefore a key pillar of the post-war social settlement, while restrictions on abortion, contraception, and “Malthusian propaganda” remained in place. Moreover, many of Vichy’s family policies (like many of its other policies) were retained, including the official celebration of mother’s day. The Monument aux Mères Françaises thus continued to be a site of official veneration of reproduction: mother’s day 1946 for instance saw public ceremonies at the monument presided over by the new Minister of Population.

Alongside its role as a symbol of official natalism, the Monument aux Mères also has a secondary history as a site of feminist resistance, used by women to either protest their position in society, or to deploy their status as mothers to alternative political ends. According to some sources, the very inauguration of the monument in October 1938 was the occasion for such a protest, in which suffragist activists from the Ligue Française du Droit des Femmes clashed with police as they attempted to lay a wreath, sarcastically emblazoned “In honour of French mothers, sublime, but still not electors”. More confirmedly, from 1942 counter-demonstrations by Communist women put a stop to Vichy’s use of the monument as a locale for mother’s day celebrations, while the post-war Union des Femmes Françaises disrupted official processions at the monument to call, in their capacity as mothers, for the end of colonial wars.

Perhaps most pertinently, on mother’s day 1971 the monument was the site of one of the first public protests by the recently formed Mouvement de Libération des Femmes (MLF), France’s most significant second-wave-feminist organisation. Two months after the publication of the famous petition (edited by Simone de Beauvoir) in which 343 prominent French women proclaimed themselves to have illegally had abortions, the MLF organised around 250 young women to gather at the Monument aux Mères Françaises and noisily denounce the exploitation of women’s reproductive capacities. Slogans included “Liberate yourself mum, you are above all a woman”, “Celebrated for one day, exploited all the year”, and, in a striking reference to Vichy, “Enough of Travail, Famille, Patrie“. Less than four years later, such protests by the MLF and other organisations would bear fruit: on 17 January 1975, the passage of the Loi Veil – denounced by the natalist far-right as the “law of anti-French genocide”- decriminalized abortion in France.

Today, the Monument aux Mères Françaises has a somewhat moribund air. Its façade is weathered, and the small park it stands in appears to be little used. However, the politics it represented are far from being a relic: whether in the form of technocratic fears about aging populations, far-right conspiracy theories about a “great replacement”, or conservative assaults on abortion rights, demography and reproduction continue to be contested issues, and natalist ideas remain alive and well. Here in France, the state has once again adopted an officially natalist outlook: last year, the recently-reactivated High Commissariat of Planning published a report calling for a “national demographic pact” to increase France’s birth-rate and “assure its demographic future”.

I am greatly indebted to the following works on the history of French natalism, and of the Monument aux Mères Françaises: