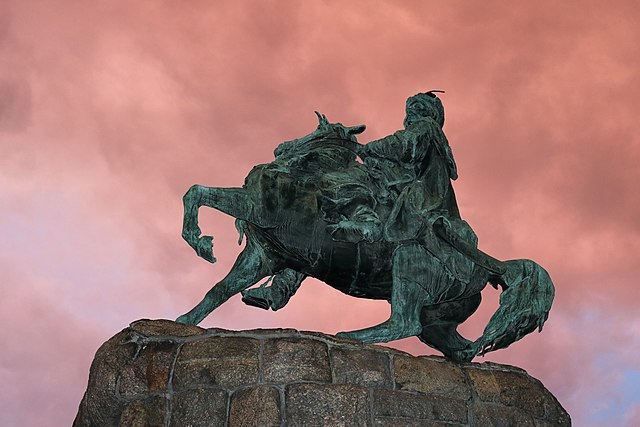 As threats of a Russian invasion of Ukraine inundate the news cycle, Emmanuel Macron has reasserted crucial diplomatic influence between the White House and the Kremlin in hopes of averting a land war on the European continent. The Guardian reported that over the weekend, Macron–Vladamir Putin’s “favored western interlocutor”–spent several hours on the phone with the Russian premier and invited both Putin and President Joe Biden to attend a summit intended to de-escalate the Ukraine crisis. Both leaders have agreed “in principle,” with Biden’s agreement contingent upon the proviso that Putin not invade the eastern European country that has long been a locus of contestation between the Kremlin and NATO.

In a departure from the U.S. precedent of hawkish militarism, the Biden White House has appealed to a diplomatic resolution to the crisis. But the Democratic establishment is, somewhat surprisingly, not alone in its desire to avert armed conflict. In what is perhaps an echo of the isolationist foreign policy for which some factions of the American rightwing lauded Donald Trump, conservative Senator Josh Hawley of Missouri wrote to Secretary of State Anthony Blinken earlier this month suggesting that the United States reassess its commitments to Ukraine and NATO. While he proposed that the United States move forward in arming Ukrainians, he condemned Biden’s movement of U.S. troops to Eastern Europe, suggesting that the buildup exacerbated tensions at a time when the best path forward was to abandon hopes of Ukraine’s potential NATO membership. For the New Yorker, Benjamin Wallace-Wells characterized the overture as an indication that the rightwing and Democratic establishments alike hoped to avert a conflict that would result in unnecessary loss of life and global economic destabilization.

In Washington, calculus on a potential armed defense of NATO expansion and the consequences of war signal a new attitude to the United States’ long assumed role as the champion of “Western” interests and arbiter of geopolitics. The shift has been a long time coming, with the August 2021 denouement of Washington’s protracted and catastrophic war in Afghanistan as perhaps the most palpable indicator of the United States humbled position on the world stage. The New York Times argues that, as U.S. midterm elections loom, Biden’s ability to keep the United States out of an armed conflict may be the harbinger of Democrat’s electoral success or failure come November. Given the United States’ historical precedent of waging war as a means of prompting electoral success, the pivot to diplomacy suggests that it is indeed a new day for Washington’s foreign policy establishment.

Meanwhile, across the Atlantic, Macron’s prospects for re-election this spring similarly hinge on the President’s ability to mollify the Ukraine crisis. As France approaches its first round of the presidentielle in April, Macron appears the clear frontrunner, his approval bolstered by his navigation of the Covid-19 crisis and now, by his role as “Europe’s de-facto leader in the quest for constructive engagement with Russia.” Despite the assumed appeal of constructive engagement and diplomatic leadership, Macron’s most significant electoral challenge comes from Éric Zemmour, a polemical far-right media figure who has seized upon the country’s robust anti-immigrant and Islamophobic sentiment to reformulate the very notions of the “West” that NATO ostensibly embodies. “There is legitimate cause to worry for the future of France,” proffers Arun Kapil in a recent article in the London Review of Books. Kapil points to the total absence of an electoral challenge from the left, as well as Zemmour’s dramatic overtaking of traditional rightwing figures like Marine Le Pen, as factors that might lead to a viable electoral challenge to Macron’s at times ambiguous though consistently centrist platform come the second round of elections on April 24.