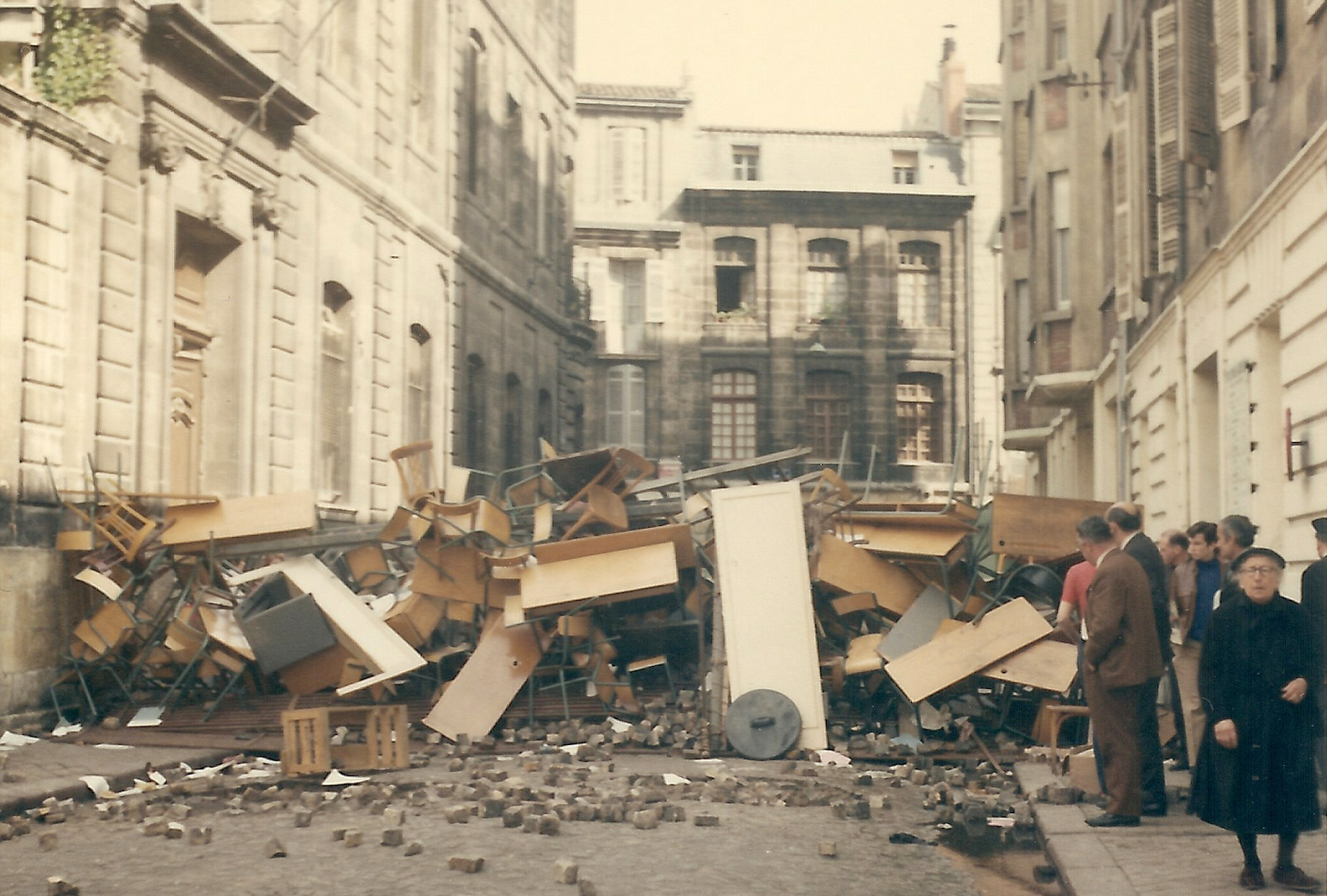 The May 1968 barricades in Bordeaux, France

In 2016 I traveled around France interviewing participants in the events of May and June 1968 for a book I was preparing, May Made Me, an oral history of the failed revolution. My plan was to interview people from the entire spectrum of the French left, from all regions and from all backgrounds, in order to discover what the lived experience was of those who took to the streets to overthrow Gaullism and capitalism. My interview subjects were students, workers, farmers, artists, and filmmakers. I avoided the leaders, who had for too long been the only voices heard. In a sense, I planned this as a potential autobiography: what would I have lived through had my sixteen-year-old self, who followed the events from my Brooklyn home, been instead a Frenchman in the heart of things.

There was one exception to my rule of avoiding leaders: I wanted to interview Alain Krivine, the founder and leader of the Trotskyist Jeunesse communiste révolutionnaire (JCR). For it was Krivine and the JCR that most attracted me in 1968, not the better-known anarchist Daniel Cohn-Bendit. At my first anti-Vietnam War demonstration, shortly after the French events, I even bought a political button I still have, with the party’s symbol, a hammer and sickle with JCR scrawled across it, encircled by the words “Support the French Revolution.”

I met Krivine—who died on March 12, 2022 at the age of eighty—in his office at the building occupied by the staff and presses of the JCR’s latest incarnation, the Nouveau Parti anticapitaliste. Krivine had retired from his party leadership posts in 2006, but this party was still his child, or perhaps grandchild. It was the fifth form of the original JCR, founded in 1966, several of which had been ordered dissolved by the government.

Krivine was not the man I expected. The magnificent head of bushy black hair of his youth was tamed and had turned gray, and the austere glasses provided by the government health plan were now stylish. More importantly for me, as we discussed his life and the events of May 1968, he was a man free of the plagues of the left, of empty triumphalism, of clichés, of sanctimoniousness. He spoke to me honestly, openly, and humorously.

Krivine, born in 1941, discovered politics early and was already a member of the Vaillants, the children’s branch of the Parti communiste francais (PCF) when he was barely ten. One of five brothers, all of whom were engaged, like Alain, in radical politics; all passed through the Communist Party. Alain was so dedicated to the cause that he was sent as a delegate to a youth conference in Moscow in 1957 as a reward for being the champion vendor of the party’s Sunday paper, L’Humanité Dimanche. All of the Krivine brothers gravitated toward Trotskyism and, as Alain told me, each did so without informing their siblings of their disillusionment with the PCF.

The main cause for discontent with the PCF was its timidity in the face of Algeria’s fight for independence. While the Trotskyists and anarchists worked actively with the Algerians, the Communists limited themselves to calling for peace in Algeria. The Algerian Communist Party fought for independence, but its military wing had been wiped out virtually in one day.

Krivine contravened the party line and worked with a support network assisting the freedom fighters. As he wrote: “I worked with Jeune Résistance, which above all worked at stopping the trains of draftees. Then I went into the Union des étudiants communistes (UEC), where I was a member of the leadership, while clandestinely being a member of Jeune Résistance. During demonstrations we tried to start up chants for independence and to wave FLN flags, while the rest shouted ‘Peace in Algeria!’ There was also activity within the army; this is what most interested me. So there was the stoppage of trains of soldiers who were leaving. Signals were sabotaged. In this way we stopped dozens of trains, and all this was much talked about.”

Alain’s dissidence was part of a trend among student Communists, particularly the Union des étudiants communistes. In 1965 the leadership of the PCF decided it had had enough of the young troublemakers in the party. The main groups within the UEC contesting the party line were the pro-Chinese, those supporting the more open Italian Communist party, and the leftists attracted to Che Guevara and Trotsky, led by Alain Krivine. All the schismatics were expelled, with Robert Linhart, leader of the Maoists, forming the Union des jeunesses communistes marxistes-léninistes and a year after his expulsion, Krivine the Jeunesse communiste révolutionnaire.

The JCR, unlike other Trotskyist organizations, was not ouvriériste, only granting the working-class revolutionary agency. The JCR was firmly implanted at the Sorbonne and Nanterre, where the revolt began, and Krivine, who was working part-time at Hachette publishers was able to participate in the demonstrations and fights at the barricades from the first day, May 3. In fact, he told me that he was paid by his employer the entire time he was a leader of the revolt.

He was a man free of the plagues of the left, of empty triumphalism, of clichés, of sanctimoniousness. He spoke to me honestly, openly, and humorously.

Looking back on it almost five decades later, Krivine’s account of May was a jaundiced one. When we discussed the barricades set up in the Latin Quarter, the images of which so transported me in Brooklyn, Krivine told me that “There was a side to it all that was an imitation of the Paris Commune. They put up stupid barricades, sometimes in an impasse where there was nothing behind it. We constructed barricades, we cut down trees, we played at being Communards of 1871.”

Krivine was part of the movement’s leadership that met every night, but he had little good to say about these meetings: “We were all there, but frankly the political discussion were at level zero. We discussed what we were going to do that night or the next day and no further than that.” Within the camp of those fighting the state, the image of May as one where students united amongst themselves against the PCF does not match Krivine’s experience. “When we spoke individually we recognized there were enormous cleavages, between Cohn-Bendit and the Maoists—between them it was virtually civil war—while for our part we were skeptical because with our Marxist-Trotskyist education, we didn’t know what it was, but we knew what it wasn’t: we knew it wasn’t a revolution. How far could it go? [Dismissive noise]. We pushed things, we pushed things…”

I pointed out to Krivine that whatever his doubts then or now, he was present everywhere in May, raising the specter of the overthrow of capitalism. He explained: “Sure, I said plenty of stupid things. The thing is you’re carried along by all this without really believing in it. That’s what’s terrible, and it’s difficult to avoid.”

When the events came to an end, the government took revenge. The JCR was banned and Krivine was first arrested and then sent to do his military service, from which he had been exempted until then. He described this rection by the state to me as “normal.” “We’d failed and now there was the repression and we were paying.”

In 1969, a year after the almost-revolution, Krivine, author of the book La Farce électorale, ran for president of France and received only 3% of the vote. But for all that, he did not abandon the electoral road: he ran again in 1974, and received 4% of the popular vote.

In 1999, despite his opposition to the EU, after forming an electoral alliance with Lutte Ouvrière, an ultra-sectarian Trotskyist group, the lifelong revolutionary was elected to the European Parliament when the joint list received 5% of the vote. He wrote of his shock at finding “[i]n Brussels cars and chauffeurs waiting for the deputies at the Gare du Midi,” and of how the first class train travel was “worth the detour, at least for any slightly curious ethnologist.”

“Sure, I said plenty of stupid things. The thing is you’re carried along by all this without really believing in it.”

Krivine remained politically active virtually until the end of his life. I asked him in 2016 if he had had any regrets, and he spoke of the effect of his political life on his family, which one of his daughters had publicly discussed in a book and a film by Virginie Linhart—herself the child of sixties revolutionaries. He told me he felt “a little bit of regret that I didn’t take more care of my children. It doesn’t cause me any pain now because I have excellent relations with my daughters; they’re grown and we have an excellent relationship. It’s also true that I didn’t take very much care of my wife either. She accepted it, but there was a distribution of tasks that was completely unequal.”

It was clear that Krivine never lost hope that the revolution would one day come. He ended our conversation by telling me that “I’ve kept, not my physical youth, but my youthful ideas. And history shows I’m right when I say this is a rotten society. People used to think I was crazy when I said I was anti-capitalist. Now they say I’m not crazy, but there’s nothing can be done about it, but that I’m right. That’s something new. And something positive.”

Our conversation over, Krivine took me for a tour of the building, introducing me to his comrades and extolling the magnificence of their printing operation. Again, his manner was that of a proud father, which he was. Alain Krivine was, after all, the founder of the most significant force to the left of the PCF. That it was still laying the groundwork for increasingly hypothetical barricades, more than fifty years after its original founding, was a tribute to Alain’s dedication.

As I was leaving he handed me a copy of his autobiography, Ça te passera avec l’âge (‘You’ll Get Over It When You’re Older’), with a lovely inscription: “To Mitch Abidor, who understands that this title is false.” I had to a large extent “gotten over it” as I got older, and I no longer share Krivine’s beliefs, but it was impossible not to admire the man. And I was far from alone: even Emmanuel Macron issued an official statement, praising Alain’s “life of commitment and activism.” May 68 is indeed far in the past.