The Politics of the Supernatural 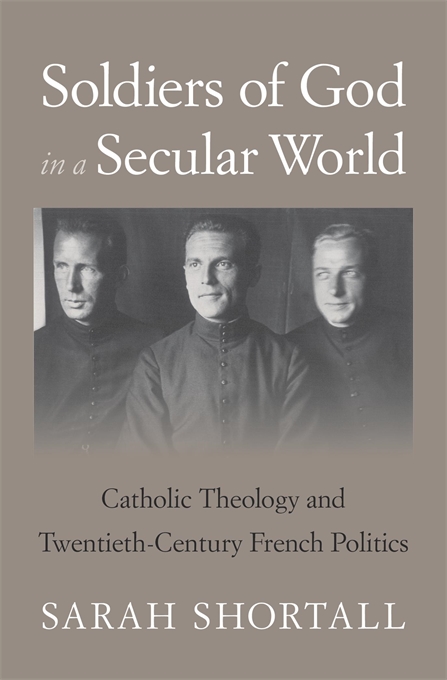 ** This is the third in a series of four reviews of Sarah Shortall’s new book Soldiers of God in a Secular World: Catholic Theology and Twentieth-Century French Politics. Each day this week one review will be published.

1. “They Saved the Church but at What Cost?” by James Chappel

2. “The Politics of Ecclesiology” by Mary Kate Holman

Tomorrow, Brenna Moore will review the book, and on Friday, Shortall will respond. **

There is a gathering consensus amongst modern historians that the secularity of recent history has been exaggerated. Not only is it the case that seemingly secular modes of thought are imbued with forgotten theological assumptions, it is also true that religious reflection has continued to shape modernity both positively and in terms of the reactions to which it has given rise.

Within this reappraisal, a new awareness has arisen that, despite laicité, Catholic thought remains powerful in France to this day. It only appears marginal if one ignores an abundant amount of evidence: for example, the fact that Jean-Paul Sartre after 1945 was asserting an atheist existentialism against an existing and much more widespread Christian existentialism in France with pre-war roots.

A considerable amount of attention has now been given to the role of French neo-Thomism in shaping novel versions of Human Rights discourse and in crafting the global post-war settlement. Likewise, the role of Emmanuel Mounier, Alexandre Marc and others in developing a third-way politics of personalism, pluralism and federalism has been allowed greater due by secular historians.

However, in her new book, which is quite simply superb, Sarah Shortall both crucially expands this picture by attending to the politics of the nouvelle théologie, and, in the course of doing so, corrects many persistent misunderstandings and simplifications of her fellow historians. These focus upon a tendency to assume that the crucial political divisions of French Catholic thinkers of this period precisely correspond to the secular ones of left and right, and if they do not do so, then they must be trying to camouflage dubious right-wing stances.

By foregrounding the contribution of the nouvelle théologie, Shortall is able to show the political relevance of a seemingly esoteric debate within Catholic theology. Even the more innovative neo-Thomists, like Jacques Maritain, still ascribed to the early modern scholastic view that human beings have a distinct natural as well as a supernatural end. Although this view was often used to support a political intégrisme, requiring a distinctly secular state (whose norms might be openly positivistic) to be nonetheless ultimately subordinate to ecclesial and clerical supremacy, it was also used to uphold the legitimacy of more purely autonomous modes of secular politics. These might be of a right-wing, liberal, or left-wing kind.

By contrast, as Shortall demonstrates in detail, Henri De Lubac SJ and his confrères refused to endorse much Catholic involvement in any mode of secular politics, just because they held that all valid human action must be oriented to the beatific vision and the eschatological unification of humanity in Christ. Their ecclesiology was their political theory, and they insisted on the Church itself as the true fulfillment of a human society of mutual recognition, mercy, and justice. Yet this was qualified by a porous and mystical sense of the bounds of Church community focused more upon the eucharist than upon organization. In practice, this meant a politics of reciprocity and subsidiarity, distanced from the norms of state and market alike.

Shortall brings out the remarkable way in which this Jesuit counter-politics proved prescient: it enabled the Lyon group to rescue French Jews, to oppose Vichy, to resist the post-war adulation of communism and no more to sanctify class than to sanctify race. Yet at the same time, it also enabled them to keep their distance from Maritain’s endorsement of (only somewhat qualified) liberal human rights. They favored instead a politics of Christian virtue as proposing a true human fulfillment in differentiated unity for all. She rightly implies that, by comparison, the French Dominican branch of the ‘new theology’ (with Chenu and Congar) remained half-wedded to the pura natura, was conceptually confused and in consequence politically less critical, besides more inclined to embrace an implausible paradox whereby secularization was taken to be really evidence of divine grace in operation.

Throughout the work the level of evidence-gathering, analysis, synthesis, clarity and judgment is consistently impressive. There is little to fault. It is illuminating to read that Gaston Fessard SJ was perhaps the prime interlocutor of Alexandre Kojève, and that Jean Danièlou SJ took part in a significant debate with Georges Bataille in a private mansion at which none other than Vladimir Lossky was present. We are reminded that Paris is a small world and that all French intellectual life has tended to focus there: fostering a pluralism of dialogue across apparently disparate positions.

What is more, theologians, including myself, have much to learn from this work of history. Shortall is surely right to foreground the seeming strangeness of the nouvelle théologie’s combination of return to the Fathers and yet seemingly greater embrace of modern philosophy than was the case with the neo-Thomists, for all the latter’s disguised modernity. She rightly focuses in this respect on concern with the human subject, and with history, which encouraged alliances with existentialism, phenomenology and French Spiritualism (after Maine de Biran), besides with Hegel in the albeit lone case of Fessard. And it is surely correct to suggest that the tensions in this combination are in part responsible for the tensions inherent in the project of Vatican II.

This has left theoretical work to be done. A clearer distinction needs to be made between the modes of historicity and subjectivism refused by the nouvelle théologie’s trajectory and those embraced by it. The allegorical and symbolic pre-modern history revived by de Lubac is clearly compatible with an existential and messianic sense of time as composed of moments which transcend linearity but may imply more criticism of the limits of the purviews of the Biblical Critic and ‘detached’ historian upon what constitutes real history than was always made apparent.

As to the human subject, the Kantian mode of finite subjectivism that is closed against both the knowledge of nature in itself and of God was surely not endorsed. And in this respect, I would suggest that, after Blondel, the nouvelle théologie’s sense of subjective action involved rather more positive, albeit mysterious, anticipations of God than the merely negative and transcendentalist gestures of aspiring refusal sometimes invoked by Shortall.

Instead of Kantian (and even purely Phenomenological) subjectivism, the modern subjectivism that was entertained—variously that of Cusa, Pico, Pascal, Biran, Ravaisson, Kierkegaard and Bergson, and even of Descartes and Malebranche—is instead one that opens into a measure of intuitive insight into, and unity with nature and the divine, besides into the depths of the self. In other words, a subjectivism that can be deemed to be in ultimate continuity with Socrates, Plato and Augustine  (if the latter is not misread) as Shortall herself indicates, invoking Mounier.

In another respect also, de Lubac and others left a tension in their wake, which Shortall amply identifies and analyzes. Despite the Blondelian element of positive anticipation, in the case of their politics the Jesuit stress upon eschatological reserve as opposed to ‘incarnation’ became ever greater. And yet their Jesuit ‘counter-politics’ was supposed to take concrete social forms. It is significant that the personalists and the followers of Marc’s Ordre Nouveau, rather more endeavored to articulate and practice these forms, yet at the same time much more fell prey to political capture by forces of both left and right and sometimes in near-succession, as in the cases of Mounier and François Perroux.

This indicates a real dilemma for a Catholic politics of the single supernatural end: how to sustain a non-worldly politics and yet retain some sort of ‘incarnational’ impact if the social dimension of eschatological witness is to be real.

Shortall correctly says that Gustavo Gutierrez, William Cavanaugh and myself have all sought to address this question and to add rather more incarnational anticipation to the eschatological suspension. She also notes Gutierrez’s attempt to fuse the Dominican and Jesuit positions and yet his ultimate succumbing to the former’s compromised dilution of the nouvelle théologie, favoring an uncritical adulation of the secular.

She rightly contrasts this with Radical Orthodoxy’s continuity with the more stringent Jesuit view, although I would want to insist that RO fully sustains the latter’s sense of a broadly-defined Church (it is, indeed, an ecumenically-situated movement) besides the witness and insight of other religions and intellectual traditions. If RO takes this as being witness to Christ as well as to God, then that is only because we think (exactly like de Lubac) that that follows from the credal affirmation that Christ is fully God. A seemingly shocking particularism here is linked to a strong universalism which believes that all of humanity, and indeed through humans all of the cosmos, will be eventually united with God, who eternally assumes also a human form—and therefore already is so, from all eternity and from an eternal perspective.

If I have ever come across as narrower than that, then I must take the blame for putting things badly. I have only ever intended to excoriate discourses that are self-defined as closed-off within a circle of pure nature. This cannot be taken to be by any means true of all the secular sciences and humanities, nor even to mean that discourses so narrowly circumscribed are in terms of their actual practice prevented from implicitly breaking those bounds.

If anything, Radical Orthodoxy seeks to make more explicit the tendency of the nouvelle théologie towards an asserted (and not merely hopeful) doctrine of universal salvation and towards a kind of ‘Christological monism’ embracing both God and the Creation as the final and eternal reality of being. It is not the least merit of Sarah Shortall’s book that she brings the latter dimension to the fore—one with roots in Augustine and Malebranche, besides the Greek Fathers, and much secretly promoted, as she describes, by Teilhard de Chardin SJ during his long period of banishment.

As a whole, her book has most admirably succeeded in recasting an entire important chapter of twentieth century intellectual and political history. It should now be clear for all to see that Henri de Lubac was just as much one of its masters and shapers as many far more well-known secular figures.

John Milbank is Professor Emeritus of Religion, Politics and Ethics at the University of Nottingham. He is the author of several books, including Theology and Social Theory, a co-founder of Radical Orthodoxy and co-author with Adrian Pabst of The Politics of Virtue.