Imagining Europe from the Interstices 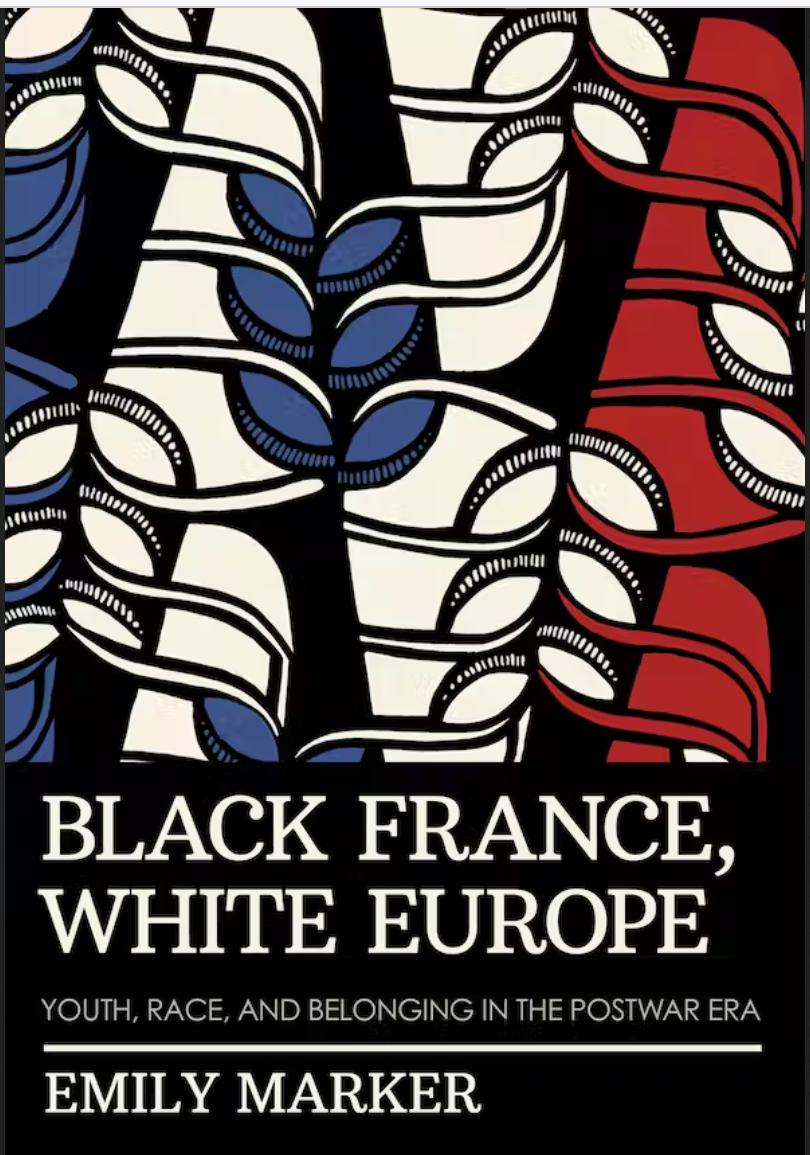 ** This is the second in a series of four reviews of Emily Marker’s Black France, White Europe” Youth, Race, and Belonging in the Postwar Era. Each day this week one review will be published. Marker will respond on Friday.

What ultimately draws scholars, students, and readers to political history is a desire to understand how humans—in the broadest sense—have steered the evolution of politics and how those politics, in turn, have shaped the course of lived experience. What is so often missing from political history, however, are the people themselves. As a historian of internationalism and decolonization in the twentieth century, I often find myself frustrated by our collective inability to look beyond the lofty memoirs of political giants or the minutes of seemingly interminable committee meetings. I have been guilty of this on more than one occasion. These sources can give us the impression of “politics” as a phenomenon that is hermetically sealed off from the goings on beyond the four walls of a legislative chamber or conference room. When we do get outside those rooms, historical explorations of politics as a lived experience tend to focus on moments of intense popular protest: the storming of the Bastille during the French Revolution, the battle for women’s suffrage that unfolded in the streets of London and other urban centers of the British empire in the early twentieth century, or the protest against French rule that took place in Sétif, Algeria at the moment of France’s liberation from Nazi occupation. While important, they also do not exhaust the intersections between lived experience and politics. In fact, they stretch far beyond these movements.

Emily Marker’s Black France, White Europe is a call to do political history differently. Her innovations are two-fold. First, while a number of groundbreaking histories in recent decades have illuminated the politics of everyday life, what Marker has offered us here is a history of the everyday life of politics. Black France, White Europe is an invitation to other scholars to center the humans—including young people—whose experiences and identities are at the core of modern politics. People engage, contest, and develop affinities with new kinds of polities not only as members of organized political movements, but also as students, sightseers, cinema-goers, educators, scouts, exchange program participants, and members of families and faith-based communities. A thorough exploration of encounters between young people, the state, and a web of social and cultural institutions can help us render more visible the contours of one of the most contested political relationships of the twentieth century: Europe and Africa. Second, this book invites us to shift the orientation of our historical inquiries. In the past several years, a number of new scholarly works have encouraged us to turn our focus from the center to the periphery. Marker’s book takes this work one step further, challenging the notion of peripherality itself. Black France, White Europe is a testament to the value of writing the history of Europe from the interstices of a globalized world—from the spaces between rather than simply from the inside out or the outside in, from the top down or the bottom up.

The book’s opening vignette sets up this intellectual work in a way that is both clear and captivating. Marker describes a group of Western European high school students who traveled to Paris and then Brest in the spring of 1953 as part of a ten-day exploration of “the future of Europe.” Participants met important politicians who tried to impart enthusiasm for the early stages of European integration. The students toured local sights and mingled together in various social settings. Near the end of the program, participants viewed a series of short films that explored different parts of Europe, including a documentary about daily life in Cameroon. Whether or not Marker’s historical actors accepted the idea that Cameroon was, or could be, a part of Europe—as she notes, many did not—this UN Trust Territory still found itself at the heart of a discussion about the geographic boundaries of European identity at moment when the very notion of “Europe” hung in the balance. “By including the film on Cameroon in the program in Brest,” Marker contends, “its French organizers were inviting a rising generation of Europeans to envision French Africa not only as an integral part of France but also as a part of Europe” (2).

Marker makes a compelling case that the histories of European integration and decolonization in Africa cannot be treated as separate stories. Instead, by bringing these “entangled histories” together in the same interpretive framework, we can begin to resolve the ostensible paradox of a French nation pulling its overseas empire into a broader union that claimed to be founded on an “apparent embrace of racial and religious pluralism” while simultaneously nurturing ties to a new Europe that was, at once, “both white and raceless, Christian and secular.” While both the French Union and integrating Europe embraced diversity—at least in theory—Marker argues that this ideal “assumed radically different forms within Europe and between Europe and the wider world.” In the space between these divergent forms, Marker identifies “new patterns of racial and religious exclusion” that are at the heart of the history that she recounts in this book.

Following in the footsteps of innovative scholars like Richard Ivan Jobs, Marker shows how young people were central to the process of creating “new kinds of composite polities” such as the French Union or what would ultimately become the European Union. While never losing sight of the high-level deliberations taking place at the Brazzaville Conference, in the gatherings of a number of governmental and intergovernmental assemblies, or at meetings of the United Nations, Marker tracks the intertwined histories of integration and decolonization through the creation of new schools, the establishment of exchange programs, and the development of scouting movements. She is clear that this is not a story about young people, but rather is a new kind of political history told through their lives and the educational infrastructure that was created to teach, inspire, liberate, and—simultaneously—to circumscribe their lives.

Any scholar of modern France would be hard-pressed to read this book and not find some element that casts a new light on their own historical investigations. Since my own work focuses on the intersections between internationalism and empire, I was particularly drawn to Chapter 5, “Forging Global Connections.” Indeed, the threads of this book linked to internationalism raise some potential questions that could engender fruitful further discussion. While the intersecting frameworks of European integration and decolonization are at the crux of the book’s argument, and thus are theorized in an explicit and nuanced way, global organizations like the United Nations and its specialized agencies lurk more stealthily in the background. I believe, however, this story can tell us as much about the spaces opened or foreclosed by global institutions as it does about those created or closed off by French and European ones. I would be curious to know, for example, if Marker agrees with a recent statement by UN Secretary-General António Guterres that “[t]oday’s multilateralism lacks scale, ambition, and teeth”? Projecting this question backward: when it comes to the UN’s ability to shape colonial rule in the decades that followed the Second World War, what meaningful interstitial political spaces might have been opened up, for example, by the UN’s oversight of colonial education in non-self-governing territories? Are the United Nations and its specialized agencies indeed a manifestation of multilateralism without teeth? Or, alternatively, does the UN simply shape politics in individual states and empires in ways that differ from our expectations? More broadly, how do global institutions fit into the imbricated frameworks of decolonization and integration that are theorized in the book? What role did the UN play—if any—in the process of decolonizing belonging? And what does the answer to this question tell us about internationalism in the second half of the twentieth century?

As a teacher-scholar at a small liberal arts college, I often find myself reading new scholarship with an eye towards how it might illuminate the history of Europe for my students in innovative ways. In particular, I am interested in work that humanizes the most critical global processes of the twentieth and twenty-first centuries: internationalization, integration, and decolonization. At the beginning of each European history course that I offer, I pose three questions to my students: What is Europe? Where is Europe? And who is European? They debate these vigorously in pairs or small groups. It often proves to be the most impassioned discussion of the semester. Where we ultimately land is a shared understanding that our objective is not, in fact, to posit our own answers to any of these questions, but rather to understand how the questions themselves are the heart of events, processes, artifacts, and experiences that made, unmade, and remade Europe in the postwar era.

Genocide and ballot boxes, burkini bans and backpacking adventures, family medals and national liberation movements are woven into the same historical quilt of twentieth-century Europe. Yet what is often missing from both scholarship and teaching on the history of modern Europe is a deep exploration of the connective tissue that bridges the histories unfolding in the halls of the Assemblée nationale—or the conference rooms at the United Nations headquarters—and the experiences of ordinary humans, of people like the African exchange students who visited the French Alps in 1960 and who figure in Marker’s introduction. Questions of who belongs, and, perhaps more critically, who is allowed to create or challenge a shared understanding of “Europe” are at the core of historical scholarship about this imagined community. I can’t think of a better book to help my students to start unraveling these threads, and, I hope, to begin weaving them back together in a way that centers the lived experience of both decolonization and European integration. I look forward, wholeheartedly, to sharing Emily Marker’s exceptional book with them.

Jessica Lynne Pearson is Associate Professor of History at Macalester College in Saint Paul, Minnesota. Her first book, The Colonial Politics of Global Health: France and the United Nations in Postwar Africa, was published by Harvard University Press in 2018. Her current book project explores the intertwined histories of leisure tourism and decolonization in former French and British colonies.