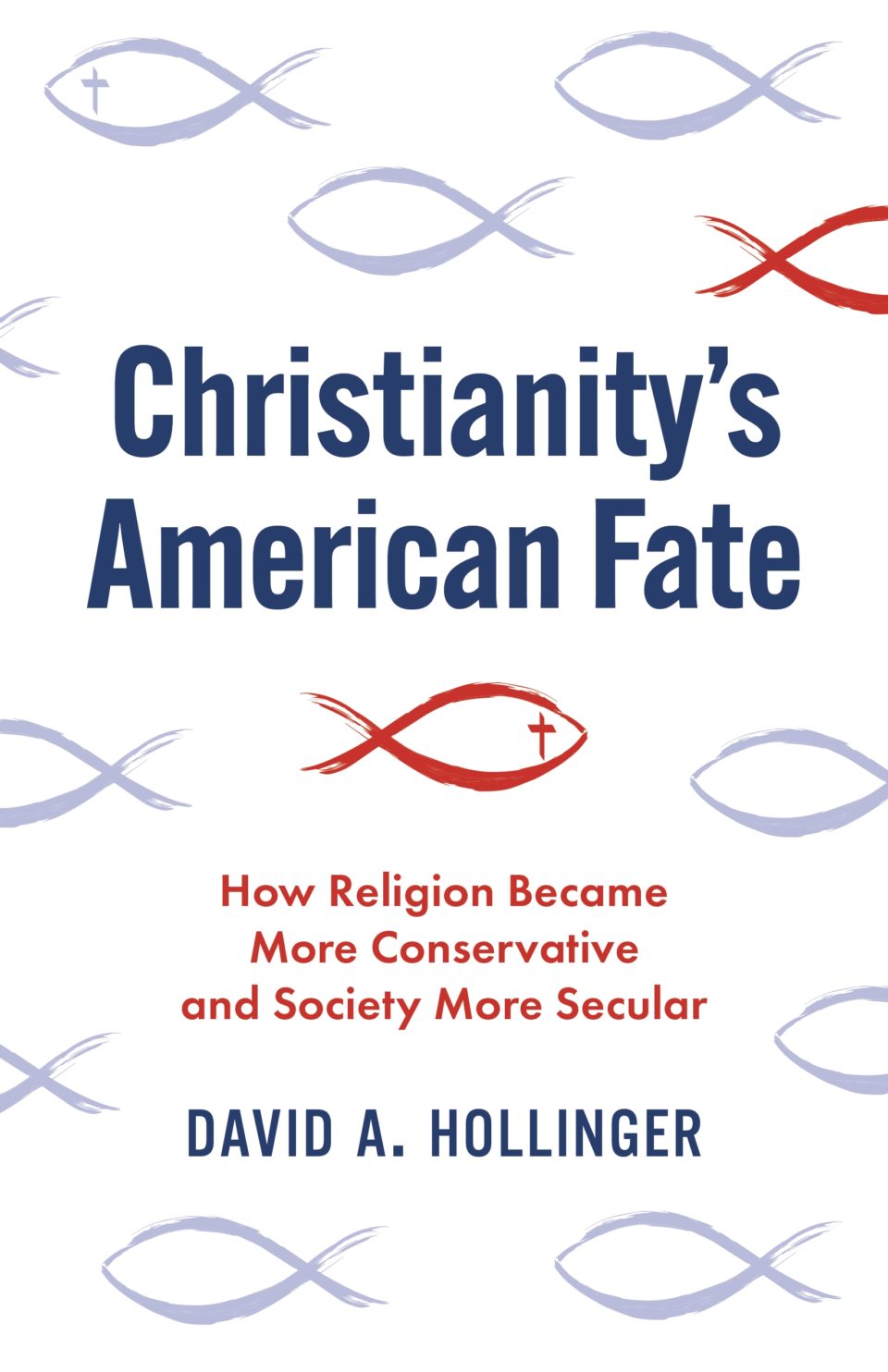 Although it comprises fewer than 200 pages, David A. Hollinger’s “Christianity’s American Fate” is really two books in one.

The first book considers the decline of liberal, mainline, or as Hollinger prefers, “ecumenical” Protestantism since the middle of the 20th century. Summarizing previous research that has won Hollinger a place among the leading historians of American religion, this  book highlights two challenges that, in combination, displaced an unofficial establishment that seemed to dominate American spiritual life from some time after the conclusion of the Civil War until about World War II.

One of these challenges came from abroad. At the peak of their vitality, ecumenical Protestants dispatched missionaries from the United States to virtually every corner of the world. Reports from their outposts—especially in China and the Middle East—were staples of churches’ activity, featuring prominently in denominational magazines, lectures, and study sessions as well as messages from the pulpit itself. With the United States reaching new heights of global power, the  wide reach of missionaries reassured believers at home that Americans were using their power for good, including impressive humanitarian efforts as well as saving souls.

But the news that missionaries sent back from their posts was also unsettling. Raised to consider non-Protestants, non-Europeans, and non-whites as, at best, benighted younger siblings, they often discovered civilizations that were not just impressive in themselves, but might even offer lessons to America and the West. If they left as confident, even chauvinistic, exporters of an American gospel, many missionaries returned humbled by the beauty, variety, and perhaps equality of human cultures—including religions. This egalitarian tendency was particularly evident among the children of missionaries, who were not necessarily so devout as their parents but whose experience of foreign lands helped them acquire leading positions as diplomats, academics, and other mandarins of a burgeoning world hegemon.

The other challenge to ecumenical ascendancy arose closer to home. America’s Protestant majority, overwhelming in the early republic, had been in relative decline since the commencement of mass Catholic immigration in the 1840s, mostly from Ireland but also from what is now Germany. Nativism was a powerful temptation and some Protestants continued to warn of the dangers of popery until within living memory. Yet it was hard to deny that Catholics, however misguided, were an integral part of the Christian faith that, it was believed, continued to define a pious people.

Jews, who began to enter the United States in large numbers only the after the Civil War, were different. Unlike other major immigrant groups, including the widely despised Italians, they were not Christians at all. This difference did not matter very much when the American Jewish community was small and culturally marginal. But as their population grew and hugely disproportionate achievement in the arts and sciences made their presence inescapable far beyond the ports of entry where Jewish residence was concentrated, Jews forced a reckoning with the widespread belief that America was, in some informal but essential way, a Christian nation.

The effect of these challenges was not felt immediately. By the 1950s, however, both had contributed to a substantial softening of traditional doctrines and institutions. Once confident that they dominated a Protestant country and then eager to lead a Christian one, ecumenical Protestants came to see themselves as equal partners in a tri-faith America and a multicultural world.

Hollinger admires this new conception of American Protestantism, which he presents as a genuine moral achievement rather than a grudging concession to cultural and demographic change. But he recognizes that it was in many ways unsuccessful. Ecumenical Protestant institutions and ideas reached their peak membership and influence in the early 1960s, when they played an important role in the Civil Rights Movement. Since then, however, their numbers and prestige have almost continually declined. Some scholars predict that once mighty denominations including the Episcopalians, Congregationalists, and Presbyterians, will essentially cease to exist by 2050—just a century after their apparent triumph.

Hollinger’s first book on the decline of ecumenicism is careful and generous, balancing obvious approval with recognition of shortcomings. His second book on the rise of evangelicalism is shrill, polemical, and uncharitable. Other writers, including some from outside the evangelical world, offer sympathetic explanations of the appeal of figures like Billy Graham, who virtually incarnated the evangelical challenge to the midcentury ecumenical establishment. While he acknowledges Graham’s popularity, Hollinger places a network of rich backers, implicit racism, and sheer marketing flair among its main causes.

Hollinger is particularly scornful of the theory, popular among sociologists, that ecumenical Protestantism withered because it demanded little of its adherents, while conservative evangelicalism flourished because it encouraged strong intellectual and social commitments. After all, Hollinger reasons, ecumenical struggles to acknowledge—and remedy—ignorance and injustice were genuinely difficult tasks that required a great deal of those who accepted them. Evangelicals, by contrast, presented themselves as counter-cultural before that term became widespread. In fact, Hollinger insists, they promised to defend comfortable, if embattled, norms of smalltown America.

This response addresses the letter of the argument without really engaging its spirit. Ecumenical Protestantism may have asked adherents to do hard things. But many of those goals were shared by secular movements. It was certainly possible to offer a religious justification for political and cultural liberalism. But it was far from necessary. And while some ecumenical Protestants continued to uphold basic elements of historical Christianity, others rejected them. Figures like the Harvard divinity professor Harvey Cox, best known for his “death of God” theology, argued explicitly that a truly progressive Christianity would almost cease to be a religion.

Evangelical movements, by contrast, offered reassurance and stability amidst the upheavals of midcentury. But it did so in an explicitly religious way. The promise of answers to all questions in Jesus and the Bible might seem simplistic. But it is also a powerful justification of those specific sources. Hollinger sneers (citing biographer Grant Wacker) that Graham had little knowledge of theology or source criticism. He does not consider the possibility that this kind of learning is not what makes Christianity—or perhaps any religion—valuable to the majority of its believers.

Yet the decline of ecumenical Protestantism was not caused by a massive shift of allegiance from ecumenical to evangelical churches. Hollinger notes the importance of cohort effects, as “increasing numbers of children reared in ecumenical congregations decided during their teens and twenties not affiliate with the churches of their parents.”(98) Higher education, he argues, played a decisive role in promoting a generational turn away from belief. In that sense, evangelicals weren’t wrong to worry that college, increasingly a requirement for middle class life, was a threat to faith.

The threat was partly intellectual.  Hollinger notes that universities were more influenced by the ecumenical missionary experience and by Jews than any other major social institutions. As a result, students could hardly escape pluralistic and critical ideas that they might have avoided at home. In recent years, educational attainment has become one of the major sources of political polarization. Hollinger points out that it was a source of religious polarization even before the effect on elections became obvious.

Claims of intellectual causation are dubious, though, because few people—even when they have college degrees—are really serious about ideas. Although he does not make the case explicitly, Hollinger gestures toward a more functionalist account of academic secularization. Before the 20th century, churches and associated institutions were the focus of cultural, artistic, and charitable activity. These roles drew in many people who were not necessarily passionate believers, but found in organized religion a means to other ends.

By the 1960s, universities had claimed many of those functions. There was no longer any need to cultivate, claim, or perhaps fake a religious commitment in order to fulfil them. Stripped of their secondary roles, by contrast, religious institutions faced a choice between imitating their secular competitors in pursuit of marginal members, or emphasizing a unique theological quality that was rapidly losing cultural cachet. Ecumenical Protestants chose the former option; evangelicals the latter.

In the concluding chapters, Hollinger contends that evangelicals made a Faustian bargain that encouraged their transformation from Christian religious movement into a quasi-ethnic adjunct of the Republican Party. Running at high speed from Nixon through Trump, Hollinger displays the same dismissive attitude toward conservative politics that he does toward conservative religion. For Hollinger, racism and sexual prejudice seem to be the only possible reason that anyone might ever vote for a Republican. That is as flat and unsatisfying an explanation for the success of a figure like Reagan as Hollinger’s dismissal of Graham as a kind of carnival barker.

Hollinger’s moralism and incuriosity about the sources, appeal, and prospects of evangelicalism and its political entanglements are a striking contrast to his indulgent fascination with ecumenicism. Although he is entitled to his opinions, which many readers will welcome, Christianity’s American Fate is more convincing when it summarizes the extraordinary scholarship to which Hollinger has devoted his career than when it attempts political punditry.

The irony is that evangelical Protestantism is already showing signs of the same social and generational exhaustion that afflicted its ecumenical predecessor. Among the lessons of the ecumenical moment after the Second World War is that apparent dominance can unravel very quickly. One day some historian will write an account of how its sources of strength were also bound up with the causes of its failure. But Christianity’s American Fate is not that book.

Samuel Goldman is an associate professor of political science at George Washington University.