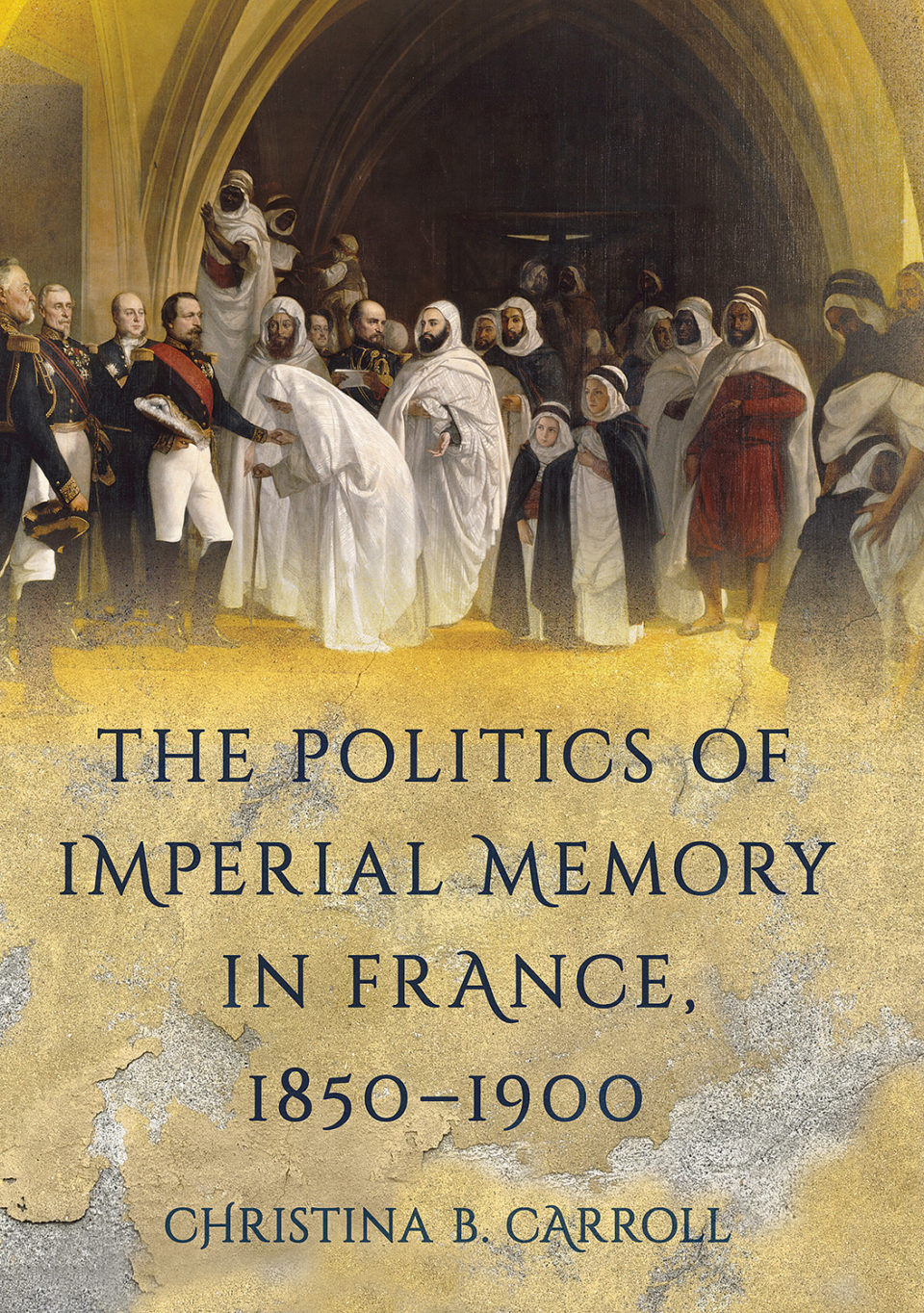 This is the first in what we hope will be a long series of very short interviews with authors about their books. We ask each author only three questions:

Entitled “The ABCs,” we hope they provide a concise and appealing introduction to books that we believe merit attention.

Today, we interview Christina B. Carroll, an assistant professor of history at Kalamazoo College, about her new book The Politics of Imperial Memory in France, 1850-1900.

Christina B. Carroll: This book’s framework intersects with two of my long-term interests. I’ve always been interested in memory and the way that popular narratives about past events shape the way different people make sense of the present. I’ve also had a longstanding interest in the question of how to define “empire,” which dates back to some of the arguments circulating in the early 2000s over whether the US war in Iraq should be seen through an imperial framework. But the book’s origin emerged more specifically out of research that I was completing for a different project. I was originally working on the memory of the Franco-Prussian War in France and Germany, and I noticed that a number of French republican writers framed French defeat in the war as an effect of France’s imperial system, which they described in both Napoleonic and colonial terms. They argued, essentially, that the Second Empire of Napoleon III had been a corrupting force that had cultivated decadence and effeminacy among the French people in order to draw popular attention away from the autocratic nature of the Bonapartist state. These descriptions thus invoked the specter of Montesquieu’s “oriental despotism” to discredit Napoleon III; some writers even described Napoleon III as an Algerian “Arab chief,” implying, essentially, that French colonial rule in Algeria had infiltrated metropolitan France through the person of the emperor himself. I was struck by how these descriptions combined a critique of Bonapartist imperialism with racist tropes about North Africa, especially because I knew that a number of these republican writers would go on to promote overseas imperial expansion in North Africa and elsewhere as a solution to republican France’s political problems less than a decade later. So I became interested in exploring how these writers moved from an apparent rejection of empire to the embrace of empire in the intervening years.

CC: My book proposes a new framework for understanding empire’s intellectual and cultural history in France. While scholars have usually studied French overseas colonial empires separately from French continental (or Napoleonic) empires, the book demonstrates that they were often perceived as interconnected in the mid-nineteenth century. By analyzing the relationship between France’s internal and external imperial systems, I show that French representations of empire were ensconced in longstanding internal political conflicts because discourses of European racial superiority over colonial others intersected with older arguments about the ideal organization of the French state. The book also demonstrates that the slow separation of “colonial” from “continental” or “Napoleonic” empire in French political culture was not inevitable; it occurred as a result of a politicized campaign led by advocates of colonialism who sought to defend overseas expansion against their political opponents.

More generally, my book also suggests how the history of ideas about empires shaped the meaning of both French republicanism and French national identity and continues to affect France and its former colonies—even in the “postcolonial” era of the twenty-first century.

CC: The book intersects with ongoing scholarly debates over the relationship between republicanism, liberalism, and empire, which—following wider debates in post-colonial theory—has been divided over an argument about whether liberalism and republicanism are inherently imperialistic and oppressive. While some historians have described colonialism as a failure to apply republican universalist principles to overseas territories, others have claimed that the origin of republican colonialism lies in those universalist principles themselves and in the republic’s inability to accommodate difference. These arguments have not only taken place between scholars; they have also reverberated—albeit in different ways—in French politics and marked contemporary debates about immigration and the value of diversity in contemporary France. In recent years, scholars studying French and British liberal thinkers have pushed back against such totalizing accounts of liberalism’s relationship to empire, emphasizing instead that liberalism and republicanism have always been evolving ideologies understood distinctly by different people at particular historical moments. The relationship between republicanism, liberalism, and empire, moreover, did not unfold in an ideological vacuum; other developments such as the abolition of slavery, new ideas about racial hierarchy, and growing competition between European powers to acquire territory around the world also helped shape it. My book’s examination of the debates over empire in the Second Empire and the early Third Republic demonstrates that when France’s second colonial empire was first being constructed, the shifting relationship between empire, liberalism, and republicanism was not only structured by republicans’ conflicting interpretations of liberal universalist principles and their mixed experiences trying to apply those principles to colonial contexts. This relationship was also affected by conflicts with other political groups whose antecedents had largely been responsible for constructing France’s earlier empires. These competing political groups—Bonapartists and monarchists alike—had their own complex relationship with the liberal political tradition, and they drew on that and other traditions to articulate their own models of empire. Republican understandings of empire developed in dialogue with and in opposition to these alternative models.

My book also contributes to conversations about the collective memory of empire, which have become increasingly vibrant over the past twenty years or so. While a number of historians have noted that an interest in historical models is characteristic of modern imperialism, most scholarship on memory and colonialism has focused on post-colonial eras. Most extant work on earlier periods has tended to look at the role played by visions of ancient Rome in French and British debates about empire. The historiography on the memory of Napoleon and the Napoleonic empire in nineteenth-century France has remained largely detached from work on French colonialism—with the exception of studies on the legacies of Napoleon I’s Egypt expedition. My book brings these different strands of scholarship into dialogue with one another by showing how different memories of Napoleonic empires entered directly into debates over the new colonial empire, its domestic political implications, and its connections to French national identity in the second half of the nineteenth century.

Christina Carroll is an assistant professor of history at Kalamazoo College with research and teaching interests in French colonial, political, and intellectual history.